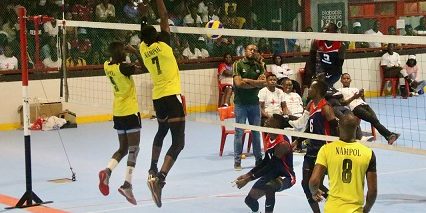 Khomas NamPol Volley Club and Revival Volley Club were on Saturday crowned the men’s and women’s champions of the 2022 Bank Windhoek Namibia Volleyball Federation (NVF) Cup respectively.
The 2022 Bank Windhoek NVF Cup was held at the DTS Sports Ground in Olympia, where Revivals Volleyball Club, one of the more dominant local female teams, comfortably retained a title they won in 2021.
Revival beat Kudos Sports Club 3-1 in their women’s division, while Beaufort Volleyball Club took the last podium position in that category.
Meanwhile, the men’s division saw a well-oiled Khomas NamPol brush off defending champions Namibia Correctional Services (NCS) 3-1 after four sets of volleyball.
Namibian Defence Force A took the third spot.
The much-anticipated men’s final between Khomas NamPol and NCS saw the Namibian police team starting as the dominant outfit, leading the match from their first serve which saw their brilliant spiking winning them the first set 25-17.
The second set saw NSC having a better quarter as the two teams exchanged points from each serve but just five minutes into that quarter, NSC created an 11-7 lead which their opponent had to chase after calling for a time break.
After the time break, NSC continued with their momentum but serving errors brought NamPol back into the game. They won that set 25-18.
The third set saw a repeat of the second, with NSC dominating the opening minutes and NamPol calling for a time-out break just four minutes into this set as NSC led the game 7-6.
Despite calling the time-out, NSC were on top of their game as they won the set 25-16 to force the match to the fourth set.
In the fourth quarter, NSC started serving, but NamPol won the first three points on the scoreboard and took a four-point lead by the time NSC called for a time-out.
NSC’s hard work and dedication saw them level the score at 16-16 at one stage of the game, but NamPol forced them to make errors and extended their lead to 18-16.
This set saw a number of time-out breaks from both teams as the score stood at 20-18 for NSC.
NamPol however got a break after the call-out by the referee on a ball which the NSC thought was their score, but it was given to NamPol as an NSC player touched the ball before it went out and NamPol took the lead to win that quarter 25-22.
The winners of the Bank Windhoek NVF walked away with N.dollars 10 000, while the runner-up got N.dollars 8 000, third place winner N.dollars 5 000, and fourth place took N.dollars 2000.