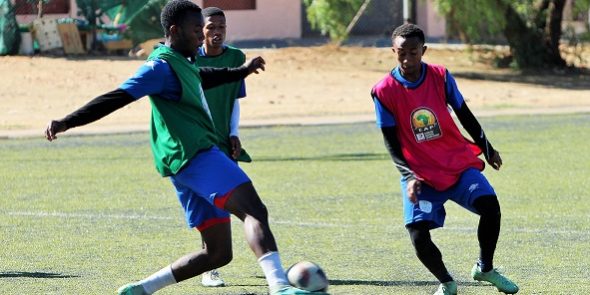 Senior national football team coach Collin Benjamin has said the Young Warriors’ 0-6 defeat to Angola on Saturday is a lesson learned that they will carry forward.
The Under-23 national team had a two-leg fixture in Luanda, Angola where they competed for a spot in the U-23 Africa Cup of Nations that will be held in Morocco in 2023.
The games were played at the 11 de Novembro Stadium in Luanda on Wednesday and Saturday.
In their first match on Wednesday, the Young Warriors lost 1-2 and on their return match on Saturday, their opponents outclassed them with a 0-6 score line.
In an interview shared by the Namibia Football Association with the media after the match, coach Benjamin said Angola’s opening goal in the fifth minute was too quick.
“We were not marking our men as we should have, that is the harsh reality of this. Our goalkeeper, the last time he played competitive football he was 14 years old but he is now 18 years. Lack of match fitness could be seen in our players,” said Benjamin, adding that the lesson learned includes seeing where the country went wrong and how these mistakes can be minimised in the future.
“A diamond is moulded under rough circumstances, maybe today in Luanda this was one of those circumstances. You can only learn through defeat and we now have to see where we went wrong and fix it because as a country we have to get players in shape and see where we can improve,” he said.
Benjamin stated that despite their heavy defeat they are not going to bury their heads and they will look at the positive side and become stronger from this experience.
The Young Warriors’ 1-8 aggregate defeat to Angola means they are out of the U-23 Africa Cup of Nations qualifiers.