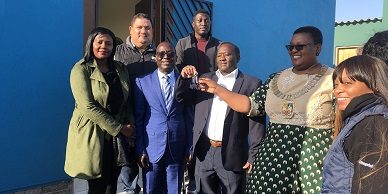 Minister of Urban and Rural Development, Erastus Uutoni, has commended the Shackdwellers Federation of Namibia (SDFN) for being consistent in constructing and availing houses across the country.
Uutoni noted that the federation ranks number one countrywide in availing houses and has to date enabled the construction of thousands of houses to low-to-middle income earners.
He made these remarks at the handover of 32 houses constructed through the SDFN at Swakopmund on Friday.
“The Shack Dwellers Federation’s solution to housing is unique and worth supporting in that it is a case of the community itself taking action to address its own developmental needs. This is a clear testimony of sustainable and people-centered development, and the ministry pledges our continued support.
We believe in and will continue to support the work of community-based organisations such as the SDFN, who have demonstrated their commitment and ability to contribute to the national drive towards providing affordable housing and proper sanitation to our people, especially those in the ultra-low and low-income categories,” Uutoni said.
He further advocated for all stakeholders to hold hands and work together toward the common good for all, adding that Government will never be enough to address all of society’s needs and encouraged other corporates to join the initiative to deliver on the promise of decent housing.
The minister urged local leadership to always avail land to low-to-middle income earners, which will not only help to expand the town in size, but will also increase the council’s revenue base in the future.
Thomas Shipili, who spoke on behalf of the beneficiaries, expressed appreciation to the government for always assisting the SDFN with funds, the sponsors, as well as council for always approving the federation’s application for land.
“We are grateful for the existence of this federation because if it was not for it, most of us would not have the chance at acquiring decent housing for our families,” Shipili noted.
The one-bedroom houses are worth N. dollars 50 000 each, which will be payable in 11 years at an interest rate of 5 per cent per annum.