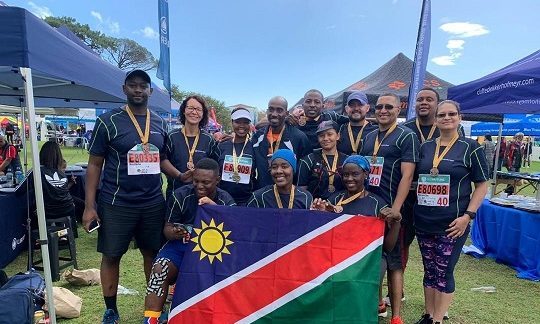 The Blue Bankers and clients who joined 30,000 other professional and running enthusiasts from 80 different countries expressed their appreciation to Standard Bank for its generous sponsorship which made it possible for them to take part in the world-famous ultra-marathon and half marathon.

Tjizapouzeu Kamatuka from the Operations Department expressed her gratitude for the opportunity to challenge herself in one of the world’s gruelling race, and to explore Africa.

“I don’t know where to start. My heart is filled with appreciation for Standard Bank,” Kamatuka said. “Thank you, Blue Bank, for giving me the chance to experience this beautiful race; I gained so much from our interaction with different people, and the vibe on race day was just a mind-blowing experience.”

Kamatuka said she is now on a mission to encourage her colleagues to start running because of the associated health benefits.

Ausspannplatz Branch Manager, Hendrik van Wyk, who ran a time of 1:53:43 in the half marathon, thanked Standard Bank for an awesome experience in Cape Town.

“Our Standard Bank Namibia (SBN) group was great, the crowd was so amazing, and the Cape Town scenery was breath-taking,” he said, adding that he has learned so much about himself, about endurance, competitiveness, discipline, will, courage and moving forward in all circumstances.

“I was never a sportsperson in my younger days, but now I am much faster than I was more than 25 years ago. Standard Bank helped me to become a much healthier person,” he said.

Van Wyk said he trained for six days a week in preparation for last Saturday’s marathon.

“When the average human being was sleeping, I was already on the road doing 6km during the week (4 days) and 10/15km over the weekends,” he said. “I started running 3km daily on my own for health reasons in 2011, but at the end of 2017 the Bank came up with this awesome wellness initiative, thus I grabbed it with both hands.”

Silveira Madaleno, who works for Katutura branch, bagged a silver medal in the half marathon after finishing the race in a time of 1hr 27m and 5s. He said the Two Oceans marathon is a beautiful, but challenging race which brings people together from all over the world. “It’s also part of wellness as people run for health purposes,” he said.

Standard Bank client Erich Goeieman also won silver in the ultra-marathon with a time of 4hrs 6minutes. Although he was 40 minutes slower than a year before after he got injured during the race, Goeieman said he will forever be thankful to Standard Bank for the opportunity to travel to Cape Town.

“They helped me a lot with all logistics, and even when Home Affairs could not process my passport on time, Standard Bank went the extra mile by getting my flights re-arranged. They never gave up on me, but rather stood by me. Standard Bank has become like a new home for me, a new family. Thank you for this life-changing opportunity,” Goeieman said.

A graduate trainee at Standard Bank, Tanitha Nell, who finished the half marathon with a time of 1hr 58m said the bank deserves all the glory for investing in its employee’s welfare.

According to Cicile Fouche, an Employee Wellness Consultant at Standard Bank, the Healthy Lifestyle Challenge which ends in September, not only caters for weight-loss, but also encourages healthier lifestyles both physically and emotionally.

Yeh-Yung Lin, an employee in the bank’s IT department said the wellness challenge has boosted his energy levels.

“My health has benefited a lot because I always get low energy. With high energy, the company also benefits because I become very efficient in my work,” Lin said.

Mercia Witbeen from the Human Capital Department said the wellness challenge has helped her get some “me time”.

“Remember, every person needs some me time apart from the family and things like that, so this wellness program that Standard Bank started gives me time to be on my own while exercising.

“During this time, I think about my own things, live in my own world and also reflect on my life. Because of this wellness challenge I am so happy at home with my child and my family – they have all come to enjoy being in my company.

“The challenge has also brought this positivity to my work which makes me work a little bit harder than I did before. I don’t know what activities do to your brain, but somehow running has improved my concentration levels and it’s giving me good results on my job.

“Thank you, Standard Bank, for this initiative which takes care of our emotional and physical needs,” Witbeen said.