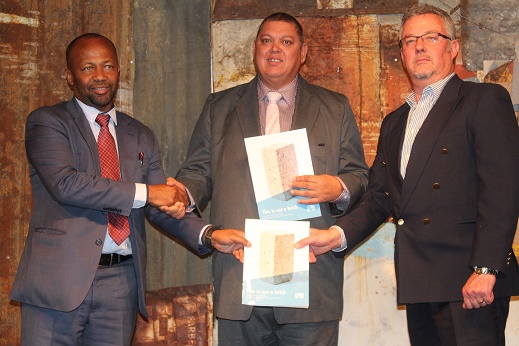 The Buy-A-Brick Initiative spearheaded by Standard Bank Namibia and the Shack Dwellers Federation has set a target of delivering 1000 houses every year to Namibians in the low-to-no income groups after co-partners in the private sector expressed interest in funding the programme.

Standard Bank Namibia Chief Executive Vetumbuavi Mungundu told guests at the launch of the Fourth Buy-A Brick initiative in Windhoek on Thursday at the NamPower Convention Centre that plans are in place to scale up the initiative into a national project after mobile telecommunications operator MTC and diversified entity Bidvest indicated interest in taking the project further through joint efforts with other corporates.

Mungundu called on like-minded corporates in both the public and private sectors to come on board and help in mobilising funding and finding solutions to the housing crisis.

“Please join this initiative and let’s make a difference by providing a home to those who may have lost hope,” Mungundu said.

He said plans are already in place to delineate the Buy-A-Brick initiative from Standard Bank to allow for more corporate participation.

“To this end, we are inviting our corporate sector and the public to join us in making the Buy-A-Brick Initiative…the focal point of efforts to finding lasting solutions for the over 500,000 Namibians that are unemployed or are under-employed.”

A new steering committee will soon be appointed to spearhead the task of mobilising funds and finding alternative building methods that would help in reducing the cost of building and the duration of construction.

Mungundu said the steering Committee’s Terms of Reference are expected to be finalised over the next six months.

“Since 2015, when we first launched the Buy-a-Brick Initiative, very few people would have predicted that this project would evolve into a big national project that it is today,” the Standard Bank Namibia Chief Executive said.

“Join us in this noble fight against homelessness and the mushrooming of shacks across our towns throughout Namibia.”

Thinus Smit, MTC Acting Managing Director, said the Buy-A-Brick initiative is arguably one of the most innovative, sustainable and successful campaigns that have ever been launched in Namibia.

“MTC is proud to have been associated with this initiative this year with an investment of N$800,000.

“I wish to commend the dedication of the Shack Dwellers Federation network, a network of visionaries, dedicated men and women who have decided to fight the housing crisis in Namibia. I wish to assure them that they are not alone because MTC has now joined this fight through this initiative,” Smit said

Deputy Minister of Urban and Rural Development, Derek Klazen, who was the guest of honour at Thursday’s launch, thanked Standard Bank Namibia and its partners for joining the struggle to alleviate the housing challenge and for addressing affordable land and shelter issues in the country.

He said government will continue to support families to acquire shelter, access to affordable land and benefits from infrastructural development especially in informal settlements.

“It is crucial that we continue to support efforts aimed at providing housing to our people,” Klazen said.

Standard Bank Namibia together with its partners has managed to raise over N$7.1 million since the Buy-A-Brick Initiative was first launched in 2015.

The funds have been used to provide decent housing to 98 beneficiaries and their families in Rehoboth, Berseba, Otjinene and Windhoek.

Another 101 new houses for disadvantaged communities in Mariental, Otjiwarongo, Aminuis, Gobabis, Okongo are currently under construction.

One of the beneficiaries of the Buy-A-Brick initiative, Elizabeth Goliath, said she is very grateful for the program which has given her family a decent home.

“I feel so happy today because before we were living in a shack at the mercy of dust, rain, cold and heat. After the house was handed over to us, instead of ducking the rain, we now can listen to it in peace in our warm house. We are sitting in a brick house after saving only N$800. We are very grateful for this program,” Goliath said.

Lack of decent housing continues to be one of the most contentious issues in Namibia which is currently facing a housing backlog of 100,000, a number which continues to grow by 3,700 every year.