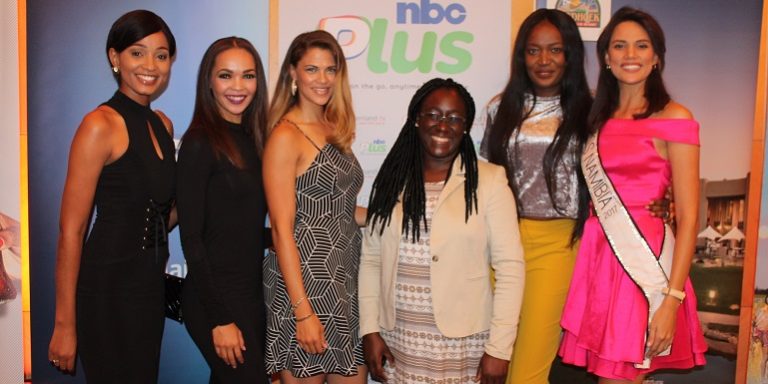 Steadfast in its commitment to the empowerment of women and enabling them with the tools to empower their communities, Standard Bank this week recommitted itself to the 39th Miss Namibia Pageant and search for the Women of Excellence.

Standard Bank’s PR and Communication’s Manager, Surihe Gaomas-Guchu, handed over a sponsorship of N$80 000 and N$100 000 for the Miss Namibia pageant and Women of Excellence initiative, respectively, during the pageants official launch for the year on 17 April at the Windhoek Country Club.

“Standard Bank has over the years continued to pledge its support to Miss Namibia and I am glad to say we have once again committed ourselves. We are glad to be associated with an event that is aimed at empowering women and in turn the larger part of our community,” Gaomas-Guchu said during the launch.

She said she was pleased that not only Namibians embark on the journey of finding one of Namibia’s most beautiful and intelligent and crowning her as such, but also to show appreciation to the many women who selflessly care for their communities through the Woman of Excellence initiative.

Standard Bank supports the development, empowerment and recognition of women in all sectors of society. Through the Woman of Excellence initiative, the bank also raises awareness towards the important role women play in our Namibian communities.

“These women (who are nominated for the Woman of Excellence initiative) have selflessly dedicated their lives to the betterment of others, often without recognition or much needed support. We are therefore calling on all Namibians to help us honour these women by nominating a Woman of Excellence in their communities for this year,” Gaomas-Guchu urged.

Community members nominate women-run charity organizations as part of the project and nominees are placed in one of two categories, one for women who have contributed greatly to the less privileged and the second for a spirit of generosity and kindness.

“Through the years we have managed to help some of our exceptional winners with much needed financial support, which they in turn use for the benefit of their communities. We would like to help more people and extend our reach further than before so we are urging every Namibian to actively look for and nominate a Woman of Excellence from within their community,” she concluded.

Entry forms for the Woman of Excellence initiative can be collected at the Standard Bank Head Office in the Town Square Centre, Windhoek on the 4th floor, Marketing Department, or from any Standard Bank branch. The new winners will be announced during the Miss Namibia 2018 Pageant, on 07 July 2018.