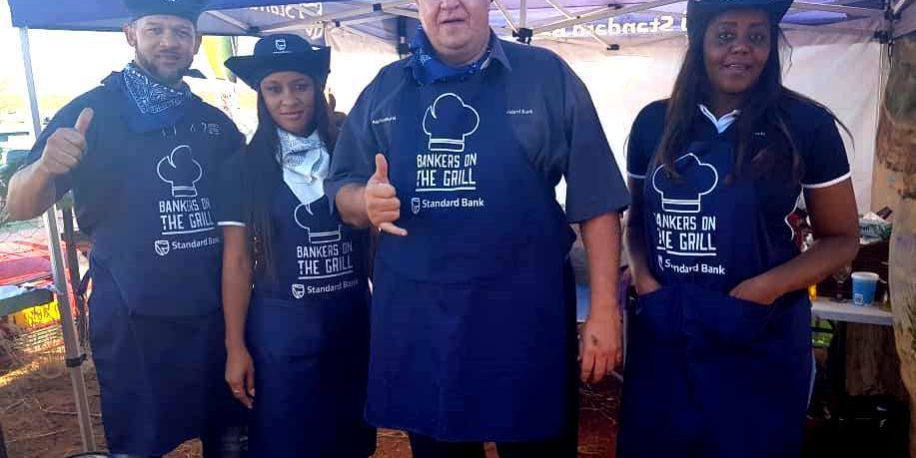 The recently concluded annual Namibia Agricultural Union (NAU) Agri Braai Competition proved to be a resounding success, with revellers streaming in from all four corners of the country in support of the event.

Standard Bank has dedicated itself over the years to support the Agriculture sector grow. Keeping in line with that, the Bank sponsored the highly anticipated NAU Agri Braai Competition. As a show of solidarity, Blue Bankers also attended the event and participated in the competition.

“We believe that it is important for us to build and maintain strong relationships with our clients. It is also important that we are visible, which goes beyond simply giving sponsorships but through interactions with our clients as it builds a strong sense of trust. I am pleased to say that the event was well organized and we were lucky to be chosen as one of the braai teams,” Standard Bank’s Agri – Business Central Manager, Piet Bergh, said of the event.

He also stressed that the Bank’s sponsorship on N$25 000 annually is a way of giving back to the Agric community and illustrating that the Bank is customer centric.

Standard Bank knows that the importance of the Agriculture sector in addressing food security and livelihood should not be overlooked as the sector supports above 70% of the Namibian population and employs about a third of the working force.

Stressing that agriculture is an integral part in growing the local economy as it contributes to 5% of the country’s’ GDP, Bergh said “Standard Bank is an integral part of this region and this country; as such we strive to support and plough back into our community and farmers associations because we understand that our relationship is a reciprocal one. I am therefore proud that we were able to be the main sponsor of this years’ NAU Agri Braai Competition.”

The highly anticipated event took place over the course of two nights at the Gobabis Show Grounds on 25 and 26 May. It was hosted by Kalahari-Oos Farmers Association who won the competition in 2017.

This year’s theme was “Cattle Country Cowboy” and the event had something for the whole family, from a “bake-off” on Friday morning, an archery competition, fun park for kids and a game auction.

The event kicked off on Friday with a dinner and entertainment by South African performers Die Broers, The Cambells and local performer DJ Jalo. This year’s competition winner is the Kaiser Street farmers association.