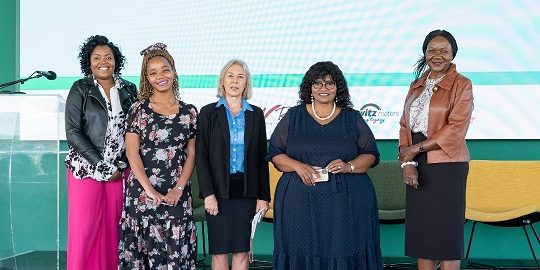 The second edition of the Nedbank in Women in Media Conference took place on Saturday, 14 May, under the theme ‘Alike in so many ways’. The conference was organised to commemorate World Press Freedom Day, as well as to try to foster a strong network amongst Namibian women working in the media industry. This year’s event was different from last year, as it also incorporated women who work in corporate communications and pr.

The speakers shared their many years of experience working in the media. They shared challenges women media face, as well as the achievement made over the years. The speakers also provided guidance on the improvements needed for women to be able to truly thrive in the industry. Attendees consisted of women who work in the media, as well as women students who are studying toward a career in media.

In her address, Gwen Lister who touched on the topics of women who create the media, as well as how women are portrayed in the media, challenged women working in media to always give the reader the opportunity to make informed choices by always practicing quality reporting, “It is critical that women journalist raise their level of reporting professionalism to ensure that people are properly informed when they have to make life or death choices based on what the media is providing.” She said.

Veteran journalist Menesia Muinjo emphasized the important role information and media play in society, “The change a story can bring, may be seen as something very small to some, but it is important to other people who are being informed.  The media has the power to change the face of the country, an individual, or an organisation.” She said.

Event organizer, Limba Mupetami said that the event was a resounding success, “I do believe that the students who attended the event have walked away with positive thoughts in regard to what the media and corporate communication jobs have offers. It was evident that all the other women in the audience are inspired by this initiative, and we are positive that this platform has made an impact on them, and we are already looking forward to next year’s event.” She said.

Mupetami also thanks all of the sponsors who assisted in making the event a success, these included, Nedbank Namibia as the main sponsor InBev, Gondwana, Namibia Wildlife Resorts, Pupkewitz Motors, and Sugar King.