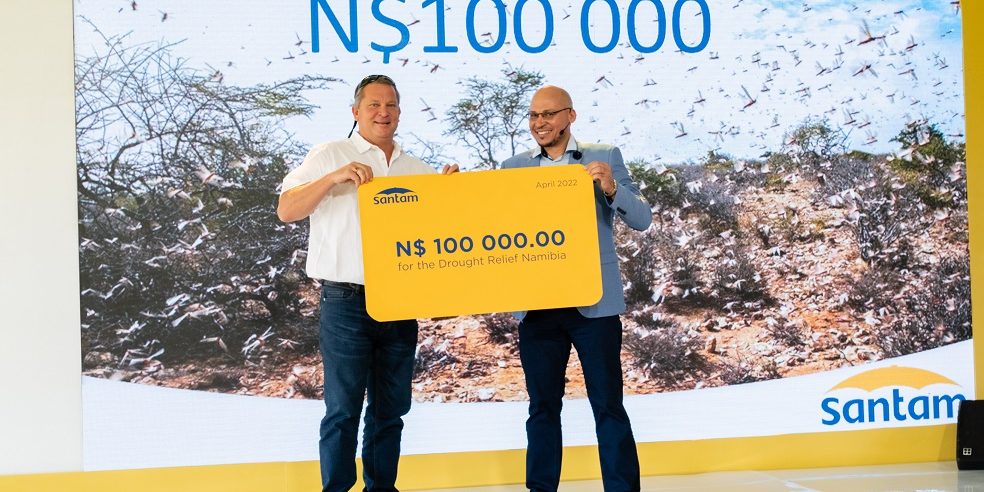 Santam Namibia has availed N.dollars 100 000 to Drought Relief Namibia to aid in the fight against the ongoing locust infestation, which has plagued the country since mid-December 2021.
Since then, locusts have destroyed over 719 000 hectares of grazing land and 1 207 hectares of crop fields in 10 of Namibia’s 14 regions, with the ||Kharas Region being the most affected.
According to Santam Chief Executive Officer Franco Feris, the funds will be used by the agriculture ministry to purchase fuel for sprayer vehicles and contribute to the salaries of those who do the spraying.
“This donation is an extension of Santam as a Namibian citizen. We consider the farmers affected by this outbreak to be members of our Santam Namibia family, not just policyholders. This is the private sector giving back to the communities in which we operate, playing a role in mitigating the impact of disasters in our societies. We are Namibians for Namibians, and we stand in solidarity with the farming community,” he said.
Feris added that, in addition to the donation, they have assembled a team on the ground in the affected areas to assess the damage and deal with claims from its clients as quickly as possible.
“We intend to ensure that in their hour of need, we live up to our brand promise of providing good and proper insurance,” he said.
According to Henriette le Grange, project manager for Drought Relief Namibia, the organisation is there for every farmer regardless of the challenges they face, which is why they are assisting with the fight against the locust infestation, adding that this is a devastating blow to the farming community, particularly farmers who had received the first good rains since 2016.
“To have a fighting chance against the infestation, we must spray the locusts from above, not from the ground, and at night when they are resting. A similar exercise would cost around N.dollars 552 000. Santam’s contribution brings us one step closer to our goal of spraying 2 500 hectares in Namibia’s south. We are grateful for the assistance, which will go a long way toward assisting farmers,” she said.

Nedbank Women in Media Conference a Success
May 17, 2022