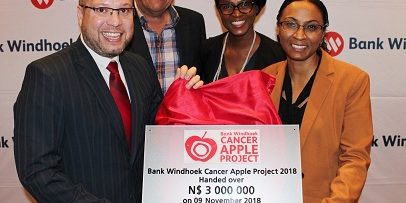 The Bank Windhoek Cancer Apple Project raised N.dollars 3 million for the Cancer Association of Namibia (CAN) this year.

This was revealed during the handing over of the funds in Windhoek on Friday.

Bank Windhoek’s Managing Director, Baronice Hans said the bank is proud to partner with CAN, whose activities align with and support the services offered by the Ministry of Health and Social Services.

A total of 603 schools participated in the project this year, selling more than 350 000 apples.

Cash prizes were given to the winning schools in the pre-primary, primary, secondary and combined schools. The first prize in each category was N.dollars 7 000, second prize N.dollars 5 000 and third prize, N.dollars 3 000.

The combined school that sold the most apples was Edugate Academy.

The Cancer Apple Project was established 18 years ago to create awareness and to educate Namibians to protect themselves against the disease.

It has raised in excess of N.dollars 20 million since its inception and was this selected as one of the ‘global innovative projects of hope’ by the 2018 World Cancer Congress in Malaysia.