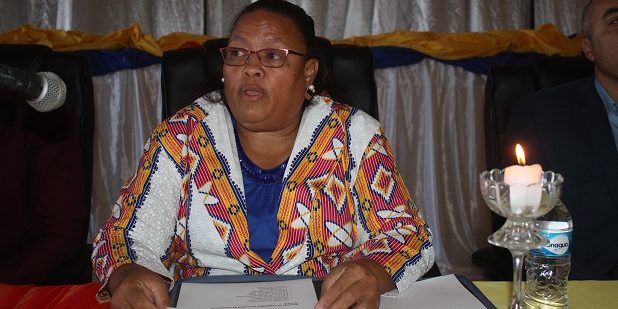 In the quest to fulfil their mandate towards road safety and in reducing road crashes in the country, the Motor Vehicle Accident Fund (MVA Fund) and the Automobile Association of Namibia (AA) partnered to host the 1st Women Road Safety Conference, on Thursday, 31 October 2018 under the theme: “Women Influence for Safer Roads.”

The conference, which attracted close to 150 women from both the public and private sectors was aimed at promoting road safety awareness and educating women in making road safety a priority in order to reduce the number of fatalities on the country’s roads.

Women in general are perceived safer drivers than men and it is with this in mind that as mothers, sisters, wives and partners, women can positively influence road safety behaviours in their male counterparts and the society at large.

Welcoming the participants at the Conference, the Governor of Khomas Region, Laura McLeodKatjirua commended both the Fund and AA for hosting an event of such magnitude in the quest to empower women to be the voice of road safety whilst re-enforcing the concepts of codependence and shared responsibility in the fight against injury and death on our roads.

The MVA Fund continues to strive towards preserving human life through various road safety interventions which include seasonal and ongoing road safety campaigns, studies on crashes and skills capacity building in emergency response services and specialized fields. “This prestigious conference supports all ongoing road safety initiatives and brings in the human element by giving women the voice they need to stand up and fight for road safety. This conference serves as a platform for the Namibian woman to raise her voice in support of safer roads by influencing policies and breaking existing status quos,” said Rosalia Martins-Hausiku, Chief Executive Officer (CEO) of MVA Fund as she addressed the participants.

The conference came about as a result of the Fund’s crash statistics that continuously indicate the high risk faced by male vehicle occupants as drivers or passengers. Year-to-date crash statistics collated by the Fund as from 01 January until 28 October 2018 revealed that 2891 males were injured in 3042 crashes, while 317 succumbed to those crashes. This is a big number in comparison to their female counterparts who recorded 1648 injuries and 122 fatalities during the same period.

Even though these figures paint a bleak picture, it is worth noting that the overall year-to-date statistics show a steady decrease in crashes (9%), injuries (18%) and fatalities (31%) as compared to the same period in 2017. “These numbers are indicative of the fact that as a nation, we are making steady progress in reducing the number of crashes and resultant injuries and fatalities. I would like to attribute this positive trend to enhanced collaboration between road safety partners as well as the general public who seem to take the issue of road safety seriously and are willing to fight against death on our roads,” stated Martins-Hausiku.

In the speech read on his behalf, Minister of Works and Transport John Mutorwa commended the Fund and AA for their continuous efforts geared towards supporting various arms of national developmental goals. “Women are determined to be the catalyst of change in road safety and have the courage to stand up and say enough is enough, let us stop the carnage on Namibia’s roads. I, therefore, applaud the MVA Fund and AA Namibia for hosting the first Women Road Safety Conference, and the subsequent establishment of the Women in Road Safety Namibia Network. This network will allow women to actively and positively influence society on road safety and safe driver behaviour,” he stated.

He further acknowledged the remarkable work done by the Fund in the various spheres of road safety and as adopted in various legislation that governs its operations. “The Fund has over the years planted small seeds in the form of public education and road safety campaigns and with rigorous nurturing and appropriate strategies coupled with intensive stakeholder management, these seeds are today entrenched and I can affirm that road safety is on our nation’s agenda.”

Additionally, the Fund continued to play a significant role in upgrading standards of public healthcare facilities which resulted in access to quality health care to all citizens in Namibia. This has been done through the infrastructural, skills capacity development and tailor-made rehabilitation programmes for its seriously injured patients.

Namibia has adopted a safe system road safety approach that talks about safer vehicles, safer roads, safer speed, and safer road use. All these facets are intertwined, therefore, causing the whole system to collapse in the absence of one. “Should Namibia continue to apply the safe system approach, enhanced commitment and resources are needed,” said Governor of the Hardap Region Esme Isaack. She further urged willing partners to support the B1 road safety interventions by establishing a Regional Emergency and Disaster Management Centre which will also provide skills development opportunities to women and youth.

The MVA Fund will continue to pull all resources together in order to create safer roads for all users and appeals on stakeholders, individuals, private and governmental organizations to come on board and join hands in creating a country free of crashes. At the same time, the 2018 Festive Season Road Safety Campaign will soon be launched and everyone is urged to think of how they can contribute towards this annual campaign to curb the number of carnages that occur on our roads mostly during this season.