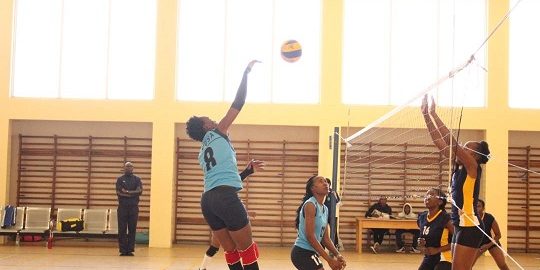 On Saturday 21 July in the men’s category, Nampower collected eight points by beating NDF, UNAM and NUST. 21BDE also went home with three points with a 3-1 comeback win against NUST. UNAM past SKW with a straight 3-0 win and the newcomer Nakagreen saw a 3-2 win against NUST.

On Saturday 21 July in the women’s category, UNAM beat NUST 3-0 but were later defeated by DTS with a 1-3 loss. Revivals Volleyball Club (RVC) beat NUST with a final score of 3-0 and later lost to NDF 3-1.

The Zambezi Volleyball Association weekend games started on Friday 20 July 2018 with UNAM KMC playing against Boys and UNAM KMC came on top by defeating Boys 3-0.The second game
was between Hippo VC verses Youth(NYS) which saw Hippos triumph with a final score of 3-0.

Hippos vs UNAM Sparks, YOUTH(NYS) vs Boys VC, and UNAM KMC vs UNAM will be played this coming week.

Currently, the two qualifying teams for NVF CUP is UNAM KMC who lead the table with 21 points and HIPPO VC who are second with 15 points.