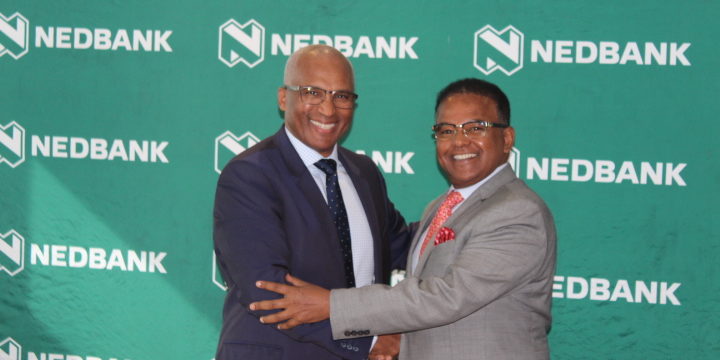 Nedbank Namibia reached a major milestone this week in charting the course for its new Headquarters set to be built in the heart of the City of Windhoek, when the Nedbank Managing Director, Lionel Matthews, and Founder and Executive Director of United Africa Group (UAG), Haddis Tilahun, signed the contract, which transfers ownership of a prized piece of land from UAG to Nedbank Namibia.

Set to add to the ever-changing skyline of the Windhoek CBD, the new Nedbank Headquarters will be situated on Fidel Castro Street, opposite the City Zoo Park, and will neighbour the Namibian Supreme Court, with close proximity to the Bank of Namibia as well as another commercial bank.

Speaking at the signing, Matthews acknowledged the hard work, which went into the acquisition, saying that this is only the first step towards delivering a fantastic workspace for Nedbank staff. “We are looking to invest significantly into building a state of the art workspace for our employees, a place where we can thrive to build our business, a place where we can serve our customers, create great careers for our people and deliver a solid return to our shareholder.”

Tilahun expressed his utmost appreciation for all of the hard work that has been concluded to date. “The image and economic impact that Nedbank Namibia is bringing about with this project is remarkable.” The UAG founder said he is proud of the association with Nedbank, and in particular, seeing the landmark signature of Nedbank become a distinctive part of the Windhoek central business district.

With this significant achievement now done and dusted, there will be a commencement of bulk earthworks on the site quite imminently.