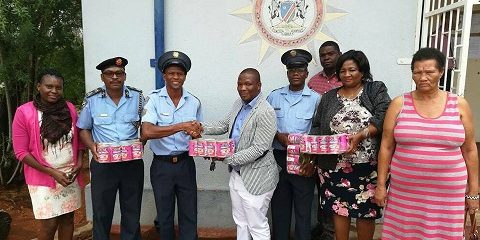 Dukeleni said he is aware of the pressing economic situation in which the country finds itself in and wanted to assist and meet the Namibian Police Force (NamPol) halfway on behalf of his constituents.
“I am doing this on behalf of the people’s office. I am entrusted to lead to hand over a token of appreciation for the hard work our police are doing,” Dukeleni noted.

He said that he hopes the public will join hands with the state and not just expect the state to give.
“We should all have the mentality of what can I do for my country and embrace it,” he remarked.
The Hardap Region’s NamPol Deputy Commissioner of Operations, Josia Shikongo, welcomed the donation, calling it a welcomed gesture.
“We are grateful for this gesture as it shows that people really see our hardwork. I will just make a call on others to emulate the good example set by the councillor. We should meet each other halfway to make changes in a positive way,” Shikongo noted.