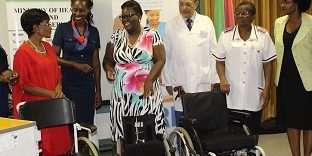 The Katutura Intermediate Hospital (KIS) on Wednesday received a donation of medical equipment from Ohorongo Cement worth N.dollars 1.2 million.

She said the OOCT delivered the medical equipment as prioritised by the Ministry of Health and Social Services through a technical corporation agreement, to complement existing medical facilities and ensure excellent medical care in public health facilities.

“This public private partnership (PPP) in the public health sector serves to narrow the gap caused by resource constraints as well as improve access to qualify health services,” Mbathera said.

Deputy Minister of Health and Social Services, Juliet Kavetuna who received the donation, said health services personnel had to start being concerned with Government resources and prioritise them to make an impact.

She said of the N.dollars 6.5 billion allocation the ministry received, about N.dollars 3.2 billion would be used for salaries and N.dollars 1.2 billion for pharmaceuticals.

Over N.dollars 2 billion are for the maintenance of 236 clinics, 35 district hospitals and eight State and intermediate hospitals.

Kavetuna said hospital personnel should thus ensure that broken equipment that can be repaired are not thrown out but fixed instead, because the budget was not sufficient.