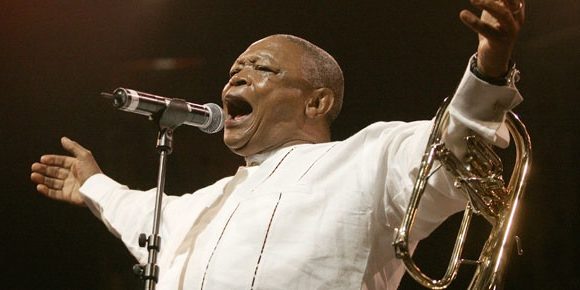 The South African jazz trumpeter, composer and singer died Tuesday at the age 78 after a long battle with prostate cancer in a Johannesburg hospital in his home country.
Masekela performed at the Windhoek Jazz Festival in 2013 and various private functions in Namibia. He could also play the flugelhorn, trombone, cornet.
Musician ‘Big Ben’, real name Ben Kandukira, said that from the few hours he got to spend with the South African legend during the 2013 Windhoek Jazz Festival, he learned that Masekela never pretended much.
“If he is in a bad mood then he is in a bad mood, and if he is in a good mood then he is in a good mood,” said Kandukira.
He said Masekela taught him that each song should have a purpose even if it is just to make people dance.
“Most importantly, the song needs to reflect on the current situation,” explained Kandukira.
He said the entertainment industry and universe have lost a person who showed the industry what it means to be consistent.
“A lot of musicians these days change their music so much just to fit in with every new trend and fashion,” he noted.
Richardo Gaalelekwe Mosimane, better known as “Elemotho”, remembered Masekela as a musician who went through the musical eras, survived and still managed to make relevant music.
“He managed to show love for the people of the continent Africa and its people,” added Elemotho.
Local songbird, Erna Chimu also expressed sadness over the passing away of Masekela, saying it is a great loss to South Africans and to the world of jazz music.
She said Masekela was an inspirational person who mostly sung about freedom, theatre and politics.
Chimu regrets not working with him.
“I met him at the jazz festival (Windhoek) and they gave me their number because they wanted to work with me, but that did not materialise,” noted a disheartened Chimu.
Masekela is survived by two children – American television host Sal Masekela, and Pula Twala.