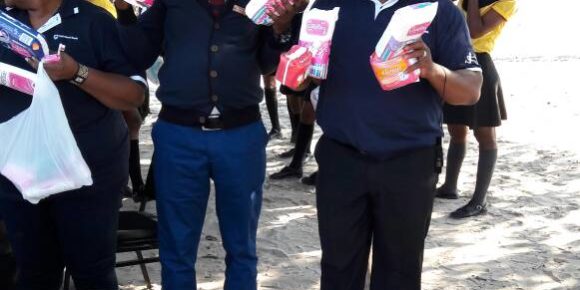 No Namibian girls should stay away from school because of the lack of sanitary necessities.

This is the momentum with which employees of Standard Bank’s northern  branches and agencies recently donated toiletries and a number of sanitary items to over 300 disadvantaged school girls of the Oshikunde Combined School in the Okongo Constituency of the Ohangwena Region.

The donation to the value of N$12 000 was handed over as part of the Bank’s North West Region social project called ‘Keeping the Namibian Girl in School’. The donated parcels to the girls comprised not only sanitary towels but also bar soaps, toothpaste/ toothbrush, creams, face cloths and washing powder as well as shoes to the community members. 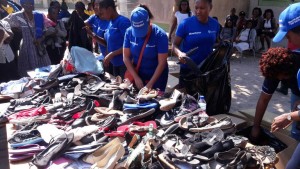 “After a visit to the rural school on our way to Okongo we made a stop over there upon request from the principal. It was then that we noticed that 9 of the girls were absent from school that particular day. Upon enquiry we were informed that the main reason is that most of them live in remote areas and the needs of toiletries especially for the girls discouraged them from attending school. This prompted us to take action as northern bankers to help out in our own small way. In Africa we believe that your neighbour’s children is your own and as a community we need to share with others,” explained” said Ismael Hakaaje, Standard Bank’s North West Regional Manager.

On average about 11 girls stay out of class per month due to monthly cycles and lack of sanitary pads and lack of know-how. The bankers then decided to take action by encouraging their colleagues in other branches and agencies to voluntarily donate these items to the school girls.

In response Principal of the School Hoster Simasiku said he was very grateful for this kind gesture by Standard Bank.

“I am honoured and privileged to be receiving such a generous donation from Standard Bank. I am also happy to see the extent to which the staff care for our school girls and encourage other institutions to follow this good example. You changed many lives and made a positive impact on girls,” he said.

With a total of 18 teachers, Oshikunde Combined School currently accommodates a total of 633 children of which 360 are girls with the majority mostly coming from disadvantaged families. 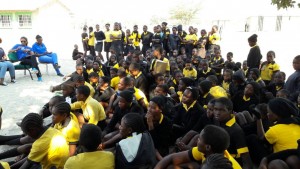