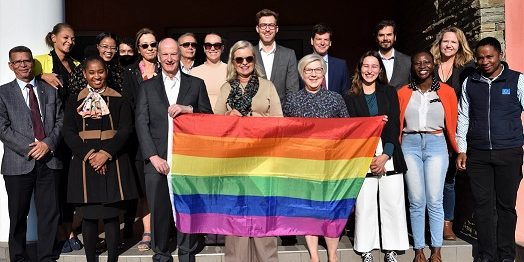 The European Union (EU) Delegation to Namibia observed the International Day Against Homophobia, Transphobia, and Biphobia in the capital on Tuesday.
The day is aimed to raise awareness about violations of the rights of people who identify themselves as lesbian, gay, bisexual, transgender, intersex, or queer (LGBTIQ+).
Speaking at the commemoration of the day, EU ambassador to Namibia, Sinikka Antila, emphasized that the EU will continue to set a good example by demonstrating solidarity and upholding its commitments to respect, protect, and fulfil the full and equal enjoyment of human rights and fundamental freedoms by LGBTIQ+ people.
‘We have seen signs of progress worldwide over the last ten years. Nonetheless, discrimination and exclusion based on sexual orientation and gender identity persist, and we are seeing a concerning backlash against LGBTI people’s rights. Levels of violence against LGBTI people are also concerning, despite the fact that they are largely unreported,” she stated.
According to Antila, LGBTI people are particularly vulnerable during armed conflicts and humanitarian emergencies. Russia’s unprovoked and unjustified aggression against Ukraine has focused attention on LGBTI people attempting to flee the conflict, with reports of transgender people being prevented from leaving the country as well as incidents of violence against LGBTI people. More needs to be done to provide them with assistance, protection, and safe spaces.
‘Young people, in particular, face rejection from their families, homelessness, and online and offline harassment because of their sexual orientation and gender identity. The European Year of Youth is taking place in 2022, and young people must be accepted and valued for who they are. We must work hard to create peaceful, inclusive societies in which everyone can thrive and feel safe,” she stated.
She went on to say that the EU supports all LGBTI people and will continue to advocate for LGBTI people’s human rights, and combat discrimination, violence, and hate speech based on sexual orientation and gender identity – in times of peace and conflict.
In a separate interview, Linda Baumann, strategic coordinator for Namibia’s Diverse Women Association (NDWA) and advocate for Lesbian Bisexual Transgender (LBT) women’s rights told Nampa that the IDAHOT highlights the level of discrimination, prejudice, and stigma directed at the LGBTI community, but it is also important to note that the day emphasizes homophobia, transphobia, and biphobia as a major problem that the country faces.
‘Namibians have an irrational fear of the LGBTI community. And that is how the level of discrimination, stigma, and prejudice is experienced because of this unknown fear that people have, but ideologically framed because we know for a fact that the level of discrimination, we are experiencing stems from the status of culture and how that culture perceives our community. Then there’s the issue of religion, which also plays a critical role,” she stated.
On a more positive note, Baumann stated that despite the LGBTI community’s negative experiences, her experience in the movement for over 20 years makes her appreciate a celebrated day like this in a country that is open to dialogue, which in turn can create an environment, a space where every person, regardless of their orientation, can be happy and live freely.