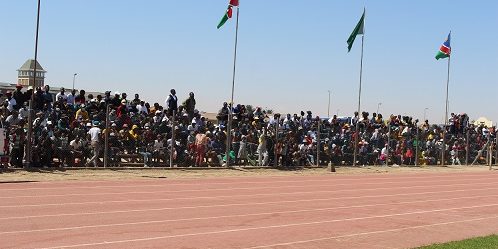 Some members of the Swakopmund community have expressed dismay over the Independence Day celebrations held at the town on Monday, saying they did not feel welcome at the event.
The celebrations, which were attended by invited guests only, did not initially allow for the accommodation of the community members due to the COVID-19 regulations which limits public gatherings to 100 people.
Speaking to Nampa on the side-lines of the event which took place at the Vineta Sports Field, some attendees noted that although they were eventually allowed in, they did not feel as if they were celebrating their country’s independence as they were still far from the main proceedings.
“I came here so early in the morning, looking forward to celebrating along the president, however when we go here, we were told we could not enter.
When we were eventually allowed in, it still did not feel like a celebration as the music stage is far, we are at a confined space and we cannot celebrate the way we have loved to,” said one of the attendees.
Meanwhile, 10-year-old Nikanor said although they were not allowed close to “the president’s tent”, he was grateful to be inside the event venue, which was initially prohibited.
Another resident, Glenda Nawatises, said she was really excited to bring her children to the country’s Independence Day celebrations and was almost disappointed when she thought they would not be able to enter the venue.
“We are always very excited to enjoy the birthday of our country and I am glad they had something prepared for us too, even during these hard times,” she said.
Deputy Prime Minister and Minister of International Relations and Cooperation, Netumbo Nandi-Ndaitwah, apologised to the community, noting that due to the COVID-19 regulations in place, they could not accommodate everyone.
“We have however made provisions for the proceedings to be heard from all corners of the stadium, and the community of Swakopmund can follow the programme,” she noted.
The event was also attended by Founding President and former President, Sam Nujoma, cabinet ministers, foreign diplomats, opposition leaders and traditional leaders, among other high-profile figures.