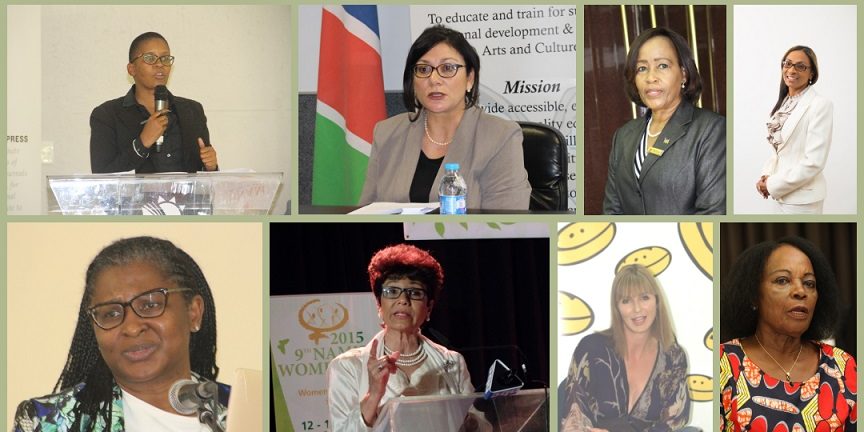 ‘Here’s to strong women. May we know them, may we be them, may we raise them.’ Every year on Women’s Day we see this saying on a fair share of social media platforms, inspiring and motivating, usually along with a well-known face alongside the text. On Tuesday we celebrate women again. Here in Namibia, we have our fair share of female icons as well, women who have and continue to inspire young girls to become like them, from Christine Mboma, the sprinter who had us cheering as she sprinted across the finish line, to Gwen Lister, journalist and press freedom activist and Baronice Hans, the first female CEO of a Namibian bank. And yet we also honour the lesser-known everyday heroines, the mother who is up before the crack of dawn to sell vetkoek to keep her children clothed and fed, the teacher who goes the extra mile to ensure that a child feels seen, and the boss lady who runs a tight ship to grow her company against all odds.

At Nampa, we have, in no particular order, highlighted some of the women who have stood out because of their contribution to society, whether in current day Namibia or decades ago.

Known for her charitable work among sufferers of eye-related illnesses, Dr Ndume has ensured that some 30 000 Namibians have received eye surgery and are fitted with intra-ocular lens implants free of charge. She has been received various awards for her work.

Who could forget the euphoria when this young lady had the world at her feet during the 2020 Tokyo Olympics? Amongst other achievements, she was the first Namibian since legendary sprinter Frankie Fredericks to bring home an Olympic medal.

Our feisty First Lady can’t be left off this list. She demands respect and certainly knows how to put a social media troll in their place. Watch how she continues to tackle the ‘golden thread of misogyny which runs through most of our countries.’ All while helping young Namibians speak out and stand up.

Namises is well-known for her social, gender equality, and human rights activism. She is also co-founder and director of Women’s Solidarity Namibia, a women’s organisation combating gender-based violence in Namibia, amongst a host of other things.

McLean, who put Namibia on the map when she won Miss Universe in 1992, was named Top Humanitarian and Entrepreneur 2021 by the International Association of Top Professionals and continues to shine a light on Namibia wherever she finds herself in the world.

Businesswoman and presidential advisor Inge Zaamwani-Kamwi previously also served as managing director of Namdeb and still inspires many women to make their entry into the business world. She previously served as president of the Namibia Chamber of Commerce and Industry, and has been a director at companies such as FNB Namibia Holdings Limited, Extract Resources (Namibia), NamGem Diamond Manufacturing, and the Diamond Board of Namibia.

Our Minister of Justice is interesting to follow on social media as she actually interacts with the public. Dausab holds a Master of Laws degree, specialising in human rights and democratisation in Africa, from the University of Pretoria. As her Twitter bio says, she is passionate about using the law for social justice.

Education in Namibia and Sanet Steenkamp are synonymous. As the Ministry of Education, Arts and Culture’s executive director, she is passionate about ensuring that children have access to education and has also become a reliable number to call whenever journalists need answers to their education queries.

You would not be wrong in calling Anna ‘Kakurukaze’ Mungunda (1932–10 December 1959) a legend. This Namibian heroine was shot dead by Apartheid police after setting alight the vehicle of a high-ranking Apartheid administrator during a demonstration against the people’s forced removal from the Old Location in Windhoek on 10 December 1959. She is a symbol of resistance and Namibian heroism.

Putuse Appolus, born on 23 September 1930, worked as a nurse in the Old Location during the 10 December 1959 uprising and subsequent shooting. She was deported to Botswana by the Apartheid regime for attending to the injured with great care. She later fled to Zimbabwe, Congo, Zambia and Tanzania, where she provided shelter to Namibian and South African freedom fighters.  In 1974, she addressed the United Nations on the plight of Namibian women and children under the yoke of apartheid. Appolus died in October 1986 in Lusaka, Zambia. Her remains were repatriated to Namibia and re-buried at the Heroes Acre in Windhoek.

The founding Executive Director of Women’s Action for Development (WAD) established women’s development projects in all regions of Namibia and carried out advocacy work to combat domestic violence. De Klerk has amongst others been nominated by the ‘Global Call to Action Against Poverty’ as goodwill ambassador for Namibia.

Singer, songwriter, actress, playwright, director, facilitator and poet, founder of ‘Song Night’, the list goes on. With accolades like these, is it any wonder she has been called the hardest working woman in Namibian showbiz?

The first Namibian woman to lead a bank, Baronice Hans has paved the way for women in banking and given young girls another icon to look up to.

The chief inspector leaves bad guys quaking in their boots with her well-known reputation as an iron lady.  From more serious crimes to ‘prosperity churches’, she’s seen it all and is not letting up on building momentum towards a more balanced public safety force.

This former First Lady is a trained educator and professional midwife and is still doing her part to help women and children, amongst others through the Organisation of the Empowerment of Widows/Widowers and Orphans of HIV/AIDS in Namibia (OEWONA).

Called ‘Meme Doctor’ during the liberation struggle, Amathila went on to become the deputy prime minister of Namibia. She is also heavily involved in working with marginalised communities like the San and Ovahimba.

When Covid-19 first broke out in Namibia, we did not know what awaited us.  Dr Almeida-Schiceya was not held back by the unknown but instead jumped into action and oversaw the conversion of the Robert Mugabe Clinic in Windhoek into a centre for patient care and infection screening.  During the first three months, Alemeida demonstrated great character and strength at a time when all hope seemed lost.

This Paralympian athlete from Walvis Bay made history when she won Namibia’s first gold medal at the Paralympic Games in 2012. She continues to compete internationally and was in 2017 named Para Sportswoman of the Year at the African Union Sports Council Region Five Annual Sports Awards.