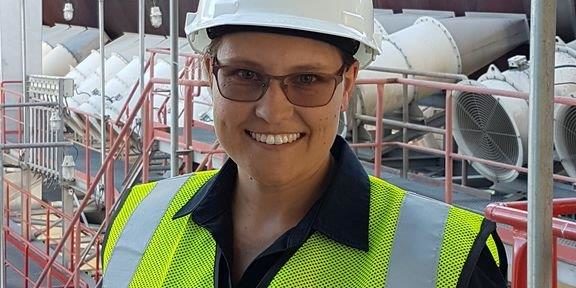 At the age of 30, Estelle Alberts become the youngest Plant Manager for Ohorongo Cement beginning 1 July 2017. Alberts joined Ohorongo Cement in July 2013 as a Divisional Production Manager: Grinding and Burning, responsible for the clinker and cement production part of the plant.

Alberts, who grew up in Grootfontein, becomes the first Namibian in this role. She takes over from Manfred Pirker who has been appointed as the Executive Adviser to the cement manufacturing plant. Mr Pirker, one of the few remaining expatriates in the company, was the Plant Manager for the past three years. He has been instrumental in the construction and commissioning phases of the cement manufacturing plant. During his tenure, the plant went from strength to strength with significant improvements in energy efficiency, quality management and capacity expansion. Mr Pirker was the main driver on site, behind the development and introduction of alternative fuels as well as the ongoing solar PV project.

“I am honoured to be chosen for this role and look forward to the challenges ahead. Over the last years the cement manufacturing plant has been optimised and expanded through the implementation of several projects. At the same time a significant effort was spent on establishing and developing the team that operates and manages the plant. This solid foundation was laid by Mr Pirker. I, with our team, would strive to build forward on this base.” says Ms Alberts.

In her new role, Ms Alberts, will be responsible for the day to day operation of the Ohorongo Cement plant near Otavi. Her duties include all production, maintenance and quality assurance activities and the focus on safety, health and the environment. For immediate release Page 2 She will also be responsible for mid-term planning and coordination of all the functions directly related to the cement production process, as well as optimization activities. Mr Pirker says, Ms Alberts’ appointment is proof that Ohorongo Cement and Namibia has an excellent team of employees that, combined with the latest technology equipment, will supply a world-class cement for Namibia and beyond.

“Ms Alberts will take the lead of this great team in her new role a move that will see Ohorongo Cement deliver a quality world class product for this country. I wish her great success in this position and many great achievements with the team of Ohorongo Cement,” said Mr Pirker.

Ohorongo Cement’s Managing Director Mr Hans-Wilhelm Schütte says: “We are very excited to have Ms Alberts as the new Plant Manager, we look forward to her continued impact on the Ohorongo family, the mining and manufacturing industry in this new role. She has shown great potential in her previous capacity especially in the process of alternative fuel and we will greatly support her in every aspect for her to bring out the best for Ohorongo Cement and Namibia.”

“It has always been the Schwenk family’s intention to one day handover the plant operations to Namibians that is why we are not shy to share expertise, knowledge and transfer of skills,” says Gerhard Hirth, Ohorongo Cement Board Chairperson.

Ms Alberts holds a Bachelor of Engineering (BEng), a Master of Science in Engineering (MScEng) and a Master in Business Administration (MBA) qualification, all obtained from Stellenbosch University.