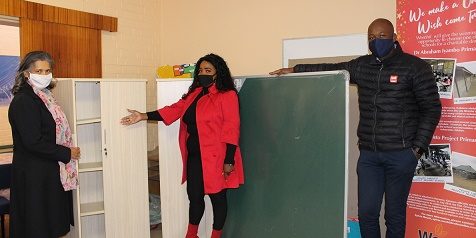 As part of their Christmas Wish List initiative for 2019, Wernhil and Broll Namibia – subsidiary of the Ohlthaver & List (O&L) Group – presented donations to Monte Christo Project Primary School and Dr. Abraham Iyambo Primary School, with the former being represented by the school’s principal, Mrs. Murangi Elizabeth Ngurimuje, and the latter by Head of Department (Languages) at the school, Mrs. Marilyn Kasume. The handover was initially postponed due to the COVID-19 pandemic but was able to take place on 1 July 2020 at the Teachers Resource Centre in Katutura, Windhoek.

Every year since 2016, Wernhil has been dedicated to its Christmas Wish List competition which invites children between the ages of six and twelve to send their Christmas wishes and motivation as to why they should receive these gifts. The winning child receives all the items on their wish list, up to the value of N$6000. As part of this initiative, Wernhil has also been continuously supporting two schools from the Havana informal area in Katutura: Dr. Abraham Iyambo Primary School and Monte Christo Project Primary School. The winning child also has the opportunity to select one of these schools to similarly receive a donation to the value of N$6000. However, in the spirit of giving, Wernhil supports both schools.

After receiving 1346 letters, the Christmas Wish List winner for 2019 was 8-year-old Rhylan Mouton who wished for gluten-free products as he has both Type 1 Diabetes and Celiac disease and such products are costly for his family. Also on his Christmas list were stationery items for himself and his sister and a tablet for his school work. Rhylan received his gifts on 18 December 2019 and selected Monte Christo Project Primary School as the school he wanted to support. Wernhil, in turn, decided to support Dr. Abraham Iyambo Primary as well. Based on the latest needs of schools, Monte Christo Project Primary School received a PA system for their assemblies and events and Dr. Abraham Iyambo Primary School was given green chalkboards with stands. Each school also received two filing cabinets as donations from the 2018 Christmas Wish List initiative. The total value of the handover was N$24,000.00.

Present at the handover was Managing Director of Broll Namibia, Terence Makari, who recognised his team’s support in keeping the initiative alive and acknowledged the need for business to play a meaningful role in education. Makari: “It is an honour to make this contribution to young Namibians. This year, Wernhil celebrates 30 years in business and exists only because society allows us to. It is therefore important we give back to the communities in which we operate. The journey with these two schools leaves us with a great sense of pride and we are only happy for it to continue. Today is an illustration of bringing O&L’s Vision to life, that is to be a catalyst for positive change, creating new realities and fulfilling dreams.” Sylvia Rusch, Head of Marketing and Public Relations at Broll echoed these thoughts: “This is one of the campaigns we are most passionate about because it represents O&L’s Purpose: Creating a future, enhancing life.”

Steve Kaangundue, Deputy Director of the Centre for Lifelong Learning and Community Development, spoke on behalf of the Director of Education for the Khomas Region, Gerard Vries, at the event. Kaangundue said, “Government appreciates the contributions to education made by the private sector because the need is great and education should be our biggest investment.”

Also in attendance was Mrs. Catherine Vries, Inspector of Education for the Khomas Regional Council, who extended her gratitude for the continuous support of these two schools. According to Mrs. Vries: “The appreciation comes from all of us at the Khomas Regional Council, Directorate of Education, Arts and Culture, Monte Christo Project Primary School and Dr. Abraham Iyambo Primary School, to the Broll Namibia Team and Wernhil Shopping Centre for having thought about us and how best teaching and learning could be improved within the Khomas Region.”