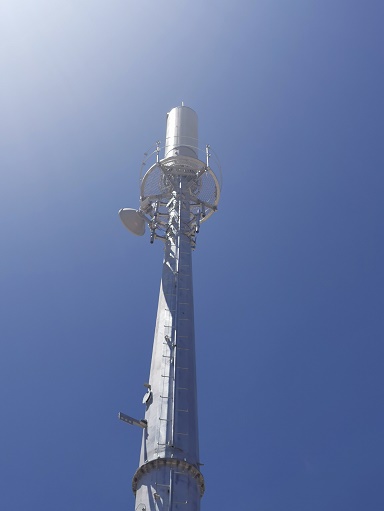 Mobile Telecommunications Limited (MTC Namibia) recently pioneered a new type of base transmitter station; the Tubestar macro base station at Osona Village Estates, some 50 kilometers north of Windhoek. As opposed to conventional network towers, a Tubestar macro base station is a single pier hollowed structure centrally located Base transmission station. This allows the entire components of the tower to be integrated within the hollow single shaft tower and not around it as the norm currently.

It is basically an enclosed vertical installation that houses all the components such as radio frequency (RF), baseband, transmission, and power supply modules as well as batteries.

The solution also reduces civil work and site rental costs and has the potential to generate an estimated 40 percent total cost of ownership (TCO) reduction in five years. The TubeStar site solution features 2 m2 footprint, which is 90 percent lower than that of traditional macro base stations (30 m2 to 60 m2).

A TubeStar site can supports up to seven band multi-RAT (GSM/UMTS/LTE) and 5G-oriented evolution, meaning it can effectively assist telecom operators to assume an early lead in 4.5 and 5G construction.

The evolution of technology is moving at a fast pace and demands tech players to incorporate innovative ways to effect and improve the way network components work together in a conventional tower (s).
The Tubestar technology occupies 75% less space than the traditional base station making it easier to offer services in an urban settlement where land allocation is usually a challenge, says Ekongo.

It eliminates the need for perimeter walls around the Base Transmitter station that consists of extra infrastructure that is incorporated within the tower. The said infrastructure solves three pain points for telecom companies: high urban macro site deployment cost, difficult site acquisition, and poor deployment efficiency. This means that MTC no longer requires a dedicated tower, cabinet and equipment room for each site.

“Although it’s higher cost, the all-in-one and environment-friendly technology sums up convenience and as it is a less objection to people while performing optimal network services,” said Ekongo.

MTC will continue to embrace the latest technology and ensure that it keeps on par with global developments by incorporating up-to-date technological features on its infrastructures, concludes Ekongo.