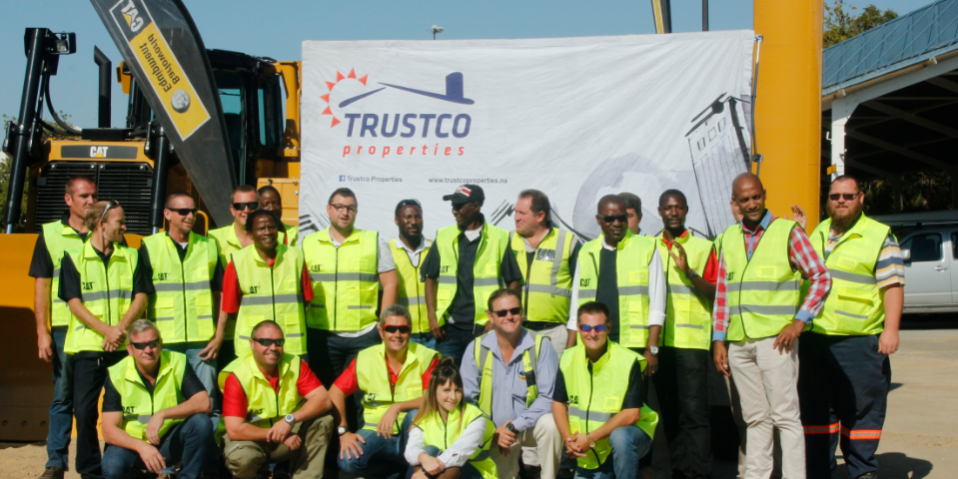 Watermeyer Mining & Construction, a subsidiary of Trustco Group Holdings, which has recently been rebranded as Trustco Construction Services (TCS)*, has enhanced the value and productivity of its fleet with over N$20 million worth of new construction equipment. The acquisition includes a front-end loader, excavators, dozer and grader from Barloworld and two 18-ton dump trucks from Bell Equipment Namibia. TCS’ team received the keys of the heavy-duty equipment from Barloworld and Bell on Tuesday morning. Adding to the 48-strong fleet, the new equipment boosts TCS’ capacity to avail serviced land for its ongoing residential, industrial, and mixed development projects. Additionally, the new equipment allows the company to service and construct on various projects simultaneously. “With at least two big projects running concurrently together with smaller ones, we’ve had to alternate use of our resources between projects – especially between Elisenheim and Lafrenz Industrial Park –, and this led to slower-than-desired delivery on our part,” said Chief Operations Officer of TCS, Kevin Fick on what necessitated the acquisition. TCS reports a line-up of major projects, particularly a road-over-rail bridge, upgrading of existing wastewater treatment works, Elisenheim future extensions, which include residential, commercial, educational and business endeavours, expanding the Lafrenz Industrial Park, and possibly another township initiative from TGH similar to Elisenheim in the near future. Elisenheim, Namibia’s largest private residential development was declared a township in 2011. It is just the first of TCS’ response to a shortage of residential properties in Namibia’s central region, and is essentially positioned to complement Government’s drive to provide housing to more Namibian citizens. The type and model of equipment were selected based on efficiency to fulfil a complete spectrum of township infrastructure development needs including new roads, storm water and drainage systems, and other civils infrastructure. TCS plans to expand its 78-man team to an estimated 200 in the future in anticipation of an increased demand for affordable lifestyle-driven residential property.