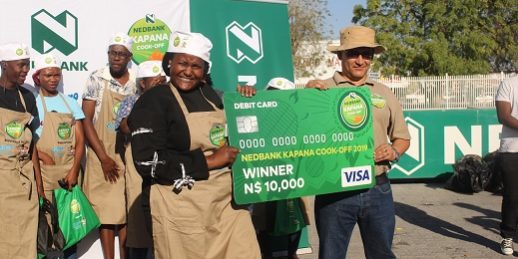 On Saturday, 24 August 2019, Oshakati native Emiliana Shoombe became the fifth winner of the Nedbank Kapana Cook-Off competition. The final, which took place at the Game Shopping Centre in Oshakati, saw 13 finalist from the Northern, Coastal, Eastern and Central regions compete for the grand prize of a mobile food truck, with built in electrical stove, freezer, fryer and grill to the value of N$ 100 000, a cash prize of N$ 10,000, a MeatMa shopping voucher to the value of N$ 5000, a year’s supply of bakpro vetkoek wheat flour, and SME development training.

Shoombe, who previously made an income by selling braai meat from home, says that winning the competition will change her life, “I am so very excited and humbled, this is a life changing prize, I will be able now be able to grow my business and really make a change in my life.”

Chef Bengina Amakoshi from the Central Region, was accorded the honour of Kapana Champion in the professional category along with a cash prize of N$ 10,000.

“On behalf of Nedbank Namibia and our esteemed partners, I would like to congratulate our finalists for having made it so far in the competition and especially to our winners. Through the Nedbank Kapana Coof-Off, we have seen the top contestants demonstrate their passion and skill for the unique art of cooking a Namibian favourite, Kapana,” said Gernot de Klerk, Nedbank Manager of Communications and CSI.

“We look forward to seeing what this year’s Kapana Champion will do with their mobile food trailer, we anticipate seeing you create a lucrative brand for this Namibian dish and formalise your trade”, de Klerk continued.

The Nedbank Kapana Cook Off attracted attention from participants across the country, preliminary rounds were held in the Northern, Eastern, Coastal and Central regions to determine a finalists.

“I would like to thank all the sponsors for giving me this opportunity, I am now going to look for an ideal spot to set up in Oshakati and start my business,” concluded Shoombe.

The Kapana Cook Off is a Nedbank Namibia initiative hosted in proud partnership with MeatMa, Pick n Pay, Bakpro and the Namibia Chefs Association.