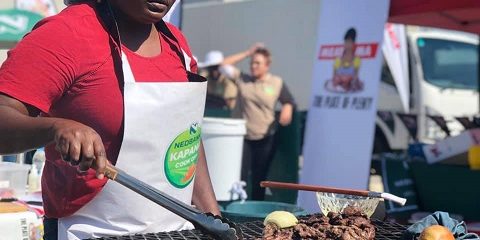 The best Kapana cooks from across the country will be facing off this Saturday, 24 August in Oshakati for the Fifth Annual National Nedbank Kapana Cook-Off final, hosted by Nedbank Namibia in conjunction with the NamChefs, MeatMa, Pick n Pay and Bakpro.

Preliminary rounds have taken place across the country, since this year’s competition launch in May, and the 13 finalist from the Oshakati, Windhoek, Gobabis and Walvis Bay rounds, will compete head to head for the title of Nedbank Kapana Cook-Off 2019 Champion.

“Our competitors are talented, passionate and driven. We wish all competitors the best of luck! Not only are we looking forward to the delicious Kapana, but we are also looking forward to the comradery and unity of Namibians coming together and doing what they love. We are also excited to once again take the final to Oshakati,” says Gernot De Klerk, Nedbank Manager for Communications & CSI.

The winner will receive a fully-fledged Kapana mobile food trailer, along with a Nedbank bank account with a N$15,000 cash balance, a MeatMa shopping voucher worth N$ 5,000, as well as SME training and mentorship.

“We hope that the winner will take the opportunity to continue investing in themselves and dedicating time to doing what they love. At the end of the day, success comes when you are doing what you are meant to do,” De Klerk emphasised.

Kapana connoisseurs are encouraged to stop by the finals to test the top-notch Kapana hot off the braai and vetkoek supplied by Bakpro. The Cook-off takes place 09h00 at the Game Shopping Centre in Oshakati.

The Nedbank Kapana Cook-off is one of the vehicles Nedbank utilises to reach out to the small players in the market to aid them in formalising their business operations. No one was left out of the competition, as vendors were able to enter free of charge, as well as compete in regional events.