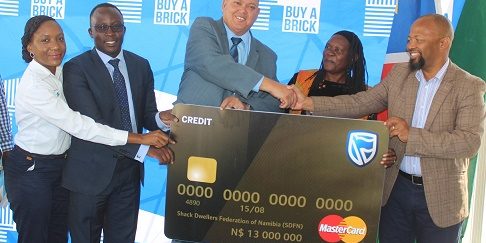 The Buy-a-Brick Initiative has handed over N$ 13 million to the Shack Dwellers Federation of Namibia (SDFN) to enable the construction of 380 houses for lowincome families next year.

The hand-over took place at Okongo in the Ohangwena Region on Thursday where 20 families also received keys to their houses that were constructed through the Buy-a-Brick Initiative. A further ten houses were also handed over to beneficiaries at Helao Nafidi Town on Friday.

Standard Bank’s Chief Executive, Vetumbuavi Mungunda handed the funds to the deputy Minister of Urban and Rural Development, Derek Klazen who in turn handed it over to the Shack Dwellers Federation.

The N$ 13 million was raised through contributions by various corporates as well as staff of Standard Bank to build houses for houses low-income groups who are organized under the Shack Dwellers Federation of Namibia in various parts of the country.

Speaking at the hand-over of the N$ 13 million and the houses, Mungunda applauded Namibian companies and individuals for reaching out in support of the neediest people in society. He said with many companies and individuals coming on board to support the initiative, it would be a matter of time before the Buy-aBrick Initiative could construct up to 1,000 houses per year countrywide to reduce the housing backlog in the country.

Mungunda, however, bemoaned the unavailability of land, saying it was stalling the construction of houses in some parts of the country. He thus called on local authorities to avail land to address the plight of the homeless people in the country. “We are appealing to authorities to positively consider our request for land, even if it has to be unserviced land, so we can construct as many low cost houses as possible and thereby address the biggest social challenge in the country,” he said.

Since its launch in 2015, the Buy-a-Brick Initiative, under the custodianship of Standard Bank, has so far enabled the construction of 200 houses in Rehoboth, Otjinene, Berseba, Windhoek, Okongo, Helao Nafidi, Mariental, Aminuis and Gobabis.

During the inaugural year, the Buy-a-Brick Initiative raised and handed over a total of N$1.4 million to the SDFN, culminating in the construction of 44 new brick houses for the low and no-income residents of Rehoboth in 2016.

In the following year, approximately N$2 million was raised to build 54 new houses and in 2018, Buy-a-Brick raised N$ 3.7 million that enabled the construction of 101 houses for members of the Shack Dwellers Federation of Namibia, bringing the total number of houses constructed so far to 200.

The Shack Dwellers Federation of Namibia is an association of national housing savings groups of mainly poor and low-income people living in shacks, informal settlements and backyards as well as over-crowded rented rooms.