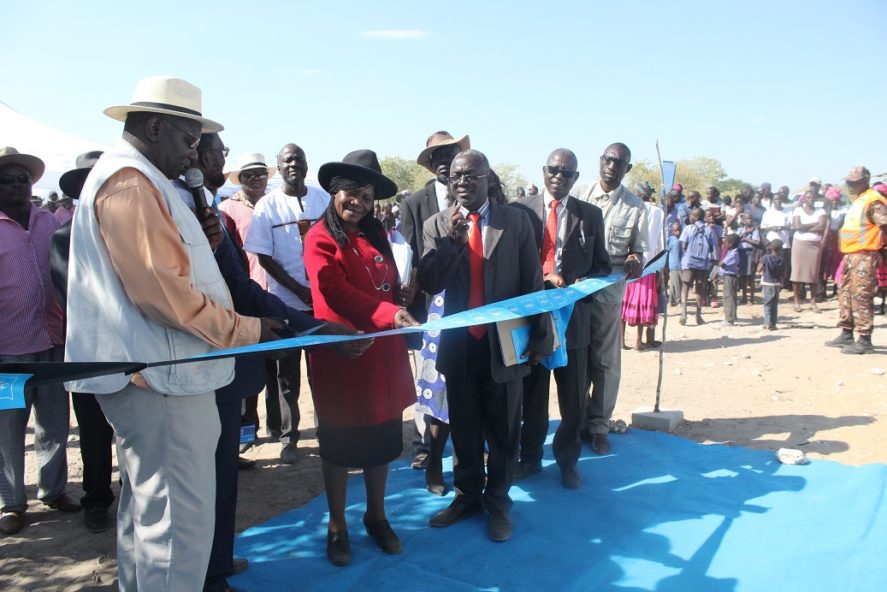 The people of Ehafo village in Okongo Constituency were on Friday, via the 081Every1 project, connected to the country’s network grid when the Minister of Information Communications and Technology, Honourable Stanley Simataa officially launched the network site in the village.

The populace of the Ehafo village and nearby remote areas has in the past experienced bad network reception, an ordeal that has now become a thing of the past postdating the launch of the newly built tower which is equipped with 3G technology.

Ululating and chanting “Oshike shetweeta” and the crowd responding “oMTC” Senior Headwoman of the Oukwanyama Traditional Authority Kuku Ester Nakale praised the giant mobile telecommunication company for finally packing away the days of walking to nearby towns for connectivity.

“I have always said that we are in good hands and under the right leadership. Today we are happy to have a network tower at the very place some of us use to head livestock as kids. I want to thank governor and the entire leadership for coming to witness this occasion. We are truly grateful” said a jovial Nakale.

Ohangwena Governor Usko Nghaamwa did not hold back his excitement at the launch saying it was a good beginning for the people of Ehafo and the region at large.

“Today we are able to connect with our families in other areas. Services as such are essential in remote areas. For long this area, which has a lot of people working very hard to meet the government, has had network problem. Let us thank the government and MTC for finally brining us network. We have a lot of needs in this village but this is a good sign of a beginning.

“This contribution comes at the right time especially with the drought. We need to have communication with other residents when our livestock is lost and found, and other uses,” said Nghaamwa.

The launch of Ehafo tower precedes another twelve network sites which are planned to go live before end of May in Kavango West, Otjozondjupa, Omaheke, //Karas, Hardap, Omusati and Oshikoto region, respectively.

Network connectivity is a significant factor that has become a necessity to all citizens; and a wheel that drives and positively contributes to the socio-economic development and betterment of people’s livelihoods. Hence the need for a driven cause to eliminate the digital divide between urban and rural areas.

Commissioning the tower on the day, line minister Simataa emphasised the importance of network connectivity, saying it is one essential beacon to development.

“Those with cell phones now have connectivity from Ehafo. No more walking to send money, you can do it from your mobile phone, especially the pensioners. We are empowering the communities. Let them communicate with their leadership and ask for the services. Those with businesses do not need to go to town to advertise. From today, let us communicate,” said the minister.

According to MTC’s Chief Human Capital and Corporate Affairs Officer, Tim Ekandjo, this development is an inclusive measure that forms part of the progressive national network project (081Every1), which the company launched in 2017 to bring about hundred percent population network coverage.

He added that “Namibians are embracing an increasingly digital enabled lifestyle driven by growing smartphone uptake, advanced 3G and 4G networks, and we owe it to our customers to channel funds and invest in projects that will attend to the fast evolving technological landscape, whilst, concurrently meeting and satisfying the customers’ expectations.