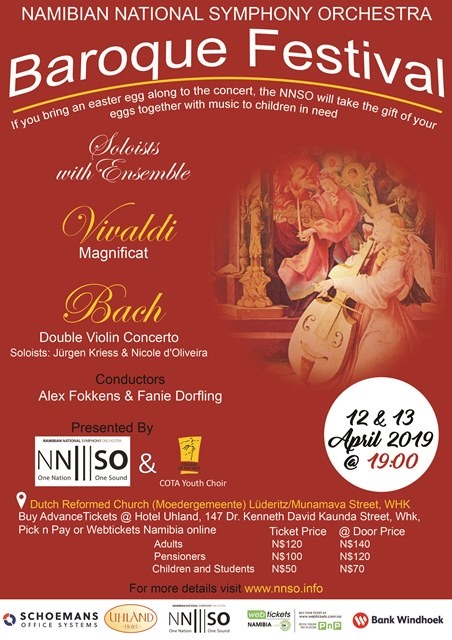 Bank Windhoek is delighted to announce that it has again sponsored the Baroque Festival, an initiative by the Namibian National Symphony Orchestra (NNSO) and College of the Arts (COTA). The Festival will take place on Friday, 12 and Saturday, 13 April 2019, at the Windhoek Dutch Reformed Church, situated on the corner of Lüderitz/Munamava Street, opposite the Old State House.

A celebration of music from the seventeenth and eighteenth centuries, the Bank Windhoek Baroque Festival will stage a variety of soloists who have been selected through an audition process to perform with the accompaniment of the NNSO. “To support young musicians, the first half of the concert will be performed by Namibian artists and young students from COTA, accompanied by NNSO,” said one of NNSO’s Board of Directors, Irmgard Rannersmann.

The audience can look forward to mesmerizing performances from vocalists such as Janice van Rooy, Emily Dangwa, Lyvodia Ouses, Elfrida Chipeio, Nythan Dien and Gallilei Njembo. Instrumental work by Georg Telemann, a German Baroque composer and multi-instrumentalist, classical pieces from masters of classical music Handel and Vivaldi, will be performed by Diana Zilberstein on organ, Carissa Esslinger on the recorder, and Nadja Roxin and Hans-Peter Drobisch on flute.

“Conducted by Fanie Dorfling and Jürgen Kriess, the highlights of the concert will be Antonio Vivaldi’s Magnificat hymn performed by the COTA Youth Choir along with NNSO and Nicole d’Oliveira performing Bach’s Double Violin Concerto. Alexander Fokkens will also be one of the conductors at the Festival,” said Rannersmann.

In support of NNSO’s outreach programme to bring music to everyone in Namibia, concert goers are requested to bring along an Easter egg which will be collected at the entrance. “Soon after the concert, members of the orchestra will distribute these eggs to a community close to Windhoek and at the same time introduce them to the music we love to play,” said Rannersmann.

The performances will start at 19:00. Advanced tickets for adults, pensioners, children and students, will cost N$120, N$100 and N$50. An extra N$20 will be charged for those buying at the door.

Bank Windhoek’s Co-ordinator of Event and Sponsorships, Suzette January, said: “As a responsible corporate citizen, initiatives such as the Baroque Festival, aligns with our commitment of adding value to the communities where the Bank is active. We encourage everyone to support the artists, especially the youth this coming weekend.”