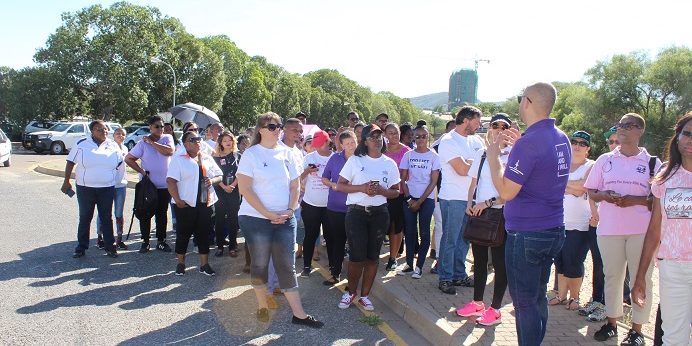 The Cancer Association of Namibia (CAN) on Monday highlighted the importance of early cancer detection, screening and diagnosis in saving lives.

CAN’s message was reiterated by its Chief Executive Officer (CEO) Rolf Hansen, during the commemoration of the World Cancer Day here on Monday, where a ‘Lavender Walk Route’ took place.

Hansen said CAN is joining global leaders such as the Union for International Cancer Control (UICC) and World Health Organisation (WHO) to inspire action from individuals, the health community and governments to improve public awareness and access to early detection and diagnosis.

“Universally, the majority of cancers are amendable to early detection. When a cancer is detected at an early stage and when coupled with appropriate treatment, the chance of survival beyond five years is dramatically higher than when detected at a later stage when the tumour has spread, and the disease is more advanced,” noted Hansen.

He explained that the National Cancer Outreach Programme of CAN is their vehicle to go out and create awareness and do screenings.
He further noted that early diagnosis can also reduce the cost of treatment, stating that high-income countries show treatment costs for early-diagnosed cancer patients are two to four times less than treating those diagnosed with advanced-staged cancer.

Hansen also mentioned that there are a number of individual-level factors that can affect early detection and screening attendance.
“Age can largely influence someone’s ability to understand and communicate their early symptoms of cancer, making children particularly vulnerable,” he said.

Hansen therefore urged primary health care officials to start learning and knowing about cancer so that when a parent or patient goes to them, they are not misdiagnosed.

Sharing similar sentiments was Cary Adams, CEO of UICC who mentioned that this year particularly on World Cancer Day, they want people to know that many cancers can be managed and even cured, especially if they are detected and treated as early as possible.

“By detecting cancer at its earliest stage, we seize the greatest opportunity to prevent millions of avoidable deaths worldwide,” she explained.

The walk was attended by cancer survivors, nurses, corporate entities and other members of the public.