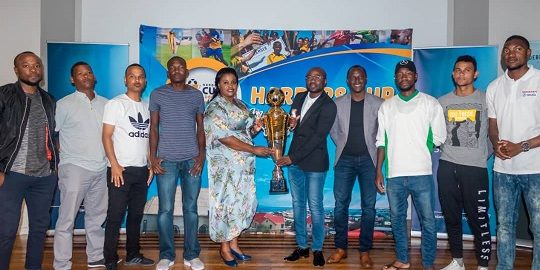 The third annual Harders Cup, slated for 30-31 March 2019 was officially launched in Luderitz on Friday.

The event also coincided with the unveiling of a brand new trophy for the winning team.

A statement availed to Nampa on Saturday by the organisers said the 2019 Harders Cup will take place at the Luderitz Soccer Stadium, where eight teams will compete for the grand prize of N.dollars 100 000.

It said seven teams are from the host town and an invitational team from neighbouring Aus, Aus United FC.

This year’s event will be delivered at a total budget of N.dollar 1.3 million made possible by various sponsors, it added.

He was quoted as saying: “I am happy to report that both shortfalls have been cleared by making alternative plans without having to ask sponsors for more money, and as of today all prize monies are up to date and we do not owe any team any money which is commendable. We are accountable to our sponsors and provide them with detailed post-mortem reports after every event detailing how every cent was spent.”

According to the statement, the Mayor of Luderitz, Hilaria Mukapuli who also spoke at the launch, commended the organisers for the entertainment and commercial value the event brings to the people of Luderitz and the||Kharas region, in general.

“This event has become one of the most exciting events on our social calendar and gives our young people an opportunity to showcase their talent,” she said.

All eight teams have confirmed their attendance.