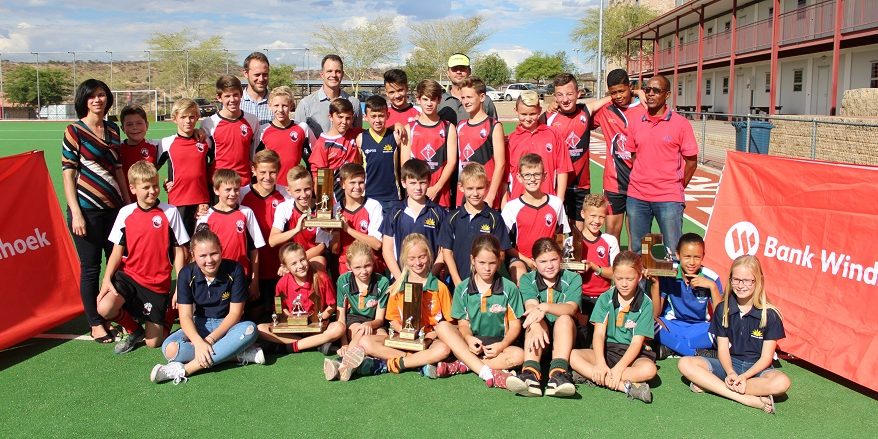 Winning medals were awarded to the age groups 10, 12 and 14 years in both the boys and the girls section A and B divisions.

The 2018 Bank Windhoek Junior Hockey Development League kicked off in June and concluded in mid-August. It had a record entry of 95 teams from 10 different schools. The matches took place at the Windhoek Gymnasium and Wanderers Hockey Fields in Windhoek.

“The Bank Windhoek Development League is an NHU Hockey Development Programme initiative. It aims to develop the sport of hockey in Namibia by educating and grooming talented young hockey players. Despite challenges such as a lack of resources for some schools, the Junior Hockey League continues to grow,” said Bank Windhoek’s Head of Corporate Affairs, Hayley Allen.

“Through the partnership with Bank Windhoek, the NHU is in the process to re-introduce hockey to the schools and regions that have stopped playing the sport due to a lack of equipment and coaches. This partnership started in 2015 and so far nine coaching clinics for coaches and children took place in seven regions in Namibia,” said NHU’s Vice President, Conrad Wessels.

Below are the full results of the winners in the B Section:

Girls under 10 B Section:

Boys under 10 B Section:

Girls under 12 B Section:

Boys under 12 B Section:

Girls under 14 B Section:

Boys under 14 B Section:

“We would like to congratulate the winning and participants teams for putting up incredible performances during the leagues fixtures. Thank you to Bank Windhoek for making this possible,” said Wessels.