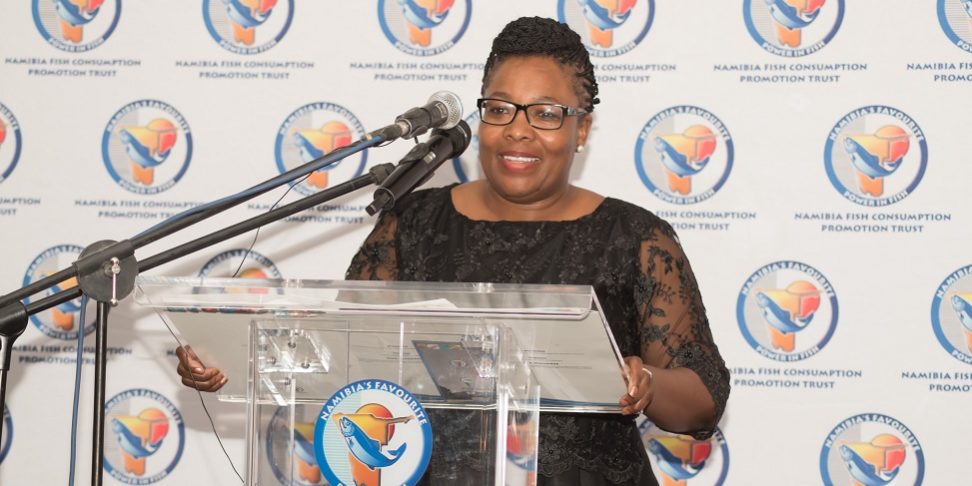 The Minister of Fisheries and Marine Resource, Honourable Bernhard Esau was the keynote speaker at both the gala dinner and the market day. Speaking at these events, the Minister noted that the fisheries industry provides a business opportunity for residents of Opuwo and the entire Kunene region at large. “I urge the fishing industry to set up enterprise development on fisheries in the Kunene region so that we can have fish shops, cold storage and processing facilities in this region”. According to the minister, Kunene residents can participate directly in the industry through supplies and logistics, hence he urged the fishing industry to explore ways to enhance the participation of Kunene region inhabitants in the sector.

The Minister also reiterated the importance of the nutritional and economic benefits of eating Namibian fish. He stated that the national target for fish consumption stands at 21.4 kg per person per year, translating into 50,000 metric tonnes of fish worth over N$500 million. “We are now at 50% of this target and if only 5% of this fish target could happen in Kunene region, it would mean an injection of about N$25 million in the region’s economy which would greatly address poverty and inequality in the area”, the Minister intimated.

Speaking at the same occasion, Mrs Suzan Ndjaleka, the Chairperson of NFCPT, revealed that NFCPT is now operating sixteen retail shops in twelve regions as part of its quest to make fish accessible in the regions, noting that more and more Namibians are demanding a variety of fish. According to her, this presents an opportunity for the private sector to partner the NFCPT to meet the unmet growing demand for fish and fishery products in the country.

The NFCPT distributed over 700 metric tonnes of fish during the 2017/2018 period compared to 5877 metric tonnes in 2016/2017. This translated into revenue of over N$87 million in 2017/2018 compared to over N$73 million in 2016/2017, the NFCPT Chairperson noted. Mrs Ndjaleka further stated that this year marks the 7th National Fish Consumption Day as it continues to cement the push for food security, whilst ploughing back into the communities as part of the social responsibility initiatives.

The seven-a-side soccer tournament finals held on the same day saw teams competing from schools within all the constituencies in the Kunene region. The event saw the Orumana Combined School walking away with the first prize consisting of gold medals and soccer equipment worth N$5000, while the Etanga Primary School received silver medals and soccer equipment worth N$3,000. The bronze medals went to the Versteende Woud Primary School with N$1,500 worth of soccer equipment, amongst other prizes. Each school team further received fish compliments of Tunacor Fisheries Ltd and Novanam Ltd.

The 8th Annual National Fish Consumption Day 2019, will be held in the Oshikoto Region.