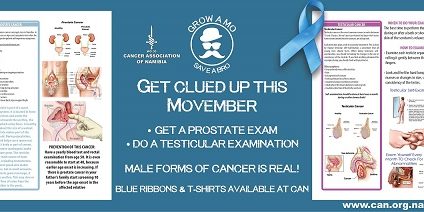 It is “Movember” and the Cancer Association of Namibia communicates on the most prevalent forms of cancer affecting Namibian men.

The “Movember Movement” is a men’s health initiative in support of the early detection of male forms of cancer, addressing more specifically prostate cancer and testicular cancer.

Originating in Australia, Namibia has been participating in the movement for the last decade already.

Early detection and endeavours to eliminate stigmas surrounding both types of cancer is done by encouraging men to grow a beard or moustache and challenge one another to have a medical check-up done. It further encourages men to share their health concerns with their peers.

Being the most common type of cancer among young men (15-37 years), most of men are completely unaware of testicular cancer. Worldwide, there are 48,500 new patients diagnosed with testicular cancer each year; 8,900 of these men will die.

As for prostate cancer, it mainly occurs in older men. About 6 cases in 10 are diagnosed in men aged 65 or older, and it is rare before age 40. The average age at the time of diagnosis is about 66. Both types of cancer are curable if detected at the early stages.

The current interim data with the Namibia National Cancer Registry shows that Skin cancer is the most occurring form of cancer amongst Namibian men. An average of 504 new cases per annum (incl. Basal Cell and Squamous Cell carcinomas) were recorded during the period 2014, 2015, 2016.

Men’s Health Clinics will be hosted by the Cancer Association of Namibia regularly on Tuesdays.

Bookings must be made in advance by telephone, and the cost is N$70 per Namibian male (please bring ID). The clinic includes and education session, family history and personal history consultation, PSA screening (only a prick of the finger and blood taken), as a first step in cancer screening.