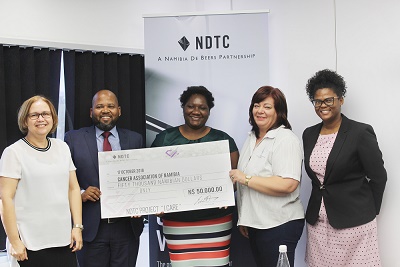 The Namibia Diamond Trading Company (NDTC) made a donation of N.dollar 50 000 to the Cancer Association of Namibia (CAN), here on Wednesday.

Speaking at the event NDTC Senior Manager for Sales and Marketing, Brent Eiseb said NDTC recognises that it has a fundamental responsibility to assist in improving the lives of disadvantaged communities in Namibia.

“Our core business is aimed to make a long-lasting contribution towards the socio-economic development of the Namibian communities,” noted Eiseb.

He also noted that he donation was in support of the activities of CAN and also in honour of Elizabeth Nepembe, an NDTC employee who is a cancer survivor, whose late son who died of Wilms Tumor, and many Namibians who are going through similar or worse experiences as a result of a cancer diagnosis.

Giving a testimony of her ordeal with the ailment, a very emotional Nepembe narrated that back in December 2007 her son Al-Jarreau Jerome Ganaseb was diagnosed with Wilms Tumor which is a type of cancer that starts in the kidney.

“This would be the first time I encounter a heartbreak on a level I never knew and that no parent should ever encounter.

As you can imagine, losing my son was hard but it was made bearable by friends, family and my NDTC family,” said Nepembe.

She explained that she thought that losing her son would be her last encounter with cancer but little did she now that she too would be diagnosed with stage two breast cancer in October 2012.

“As you can imagine my journey home was long and sombre. You see, I did not understand at the time that I still had a chance to overcome this cancer.

It just meant I needed to gear myself up for the fight of life”, she continued.

She was declared cancer free in 2014.

On her part, CAN Deputy Chief Executive Officer, Estelle Viljoen noted that the commitment on all levels and from all stakeholders remains pivotal in making an impact.

“Change plays a cardinal role, because a change in attitude, breaking the stigma and developing better national plans to combat disease, is part of our mission to rid our communities of non-communicable diseases like cancer,” stressed Viljoen.