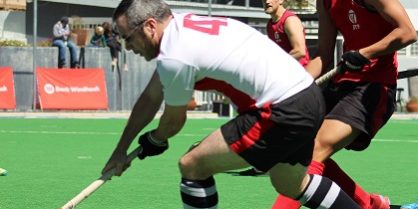 The second round of Bank Windhoek’s National Field Hockey Premier League took place this past weekend in Windhoek. Teams put in their best performances on this eagerly anticipated start to the league.

The Namibia University of Science and Technology (NUST) team lost 4-0 to a rejuvenated BDO Wanderers. Jan Izak de Villiers scored twice and walked away as the top goal scorer at the end of the match. Saints beat Deutscher Turn und Sportverein (DTS) 1-0 with Wian Schickerling scoring the solitary goal.

Saints showed why they were crowned Indoor and Night League champions when they continued their good start to the season with a 6-0 score against NUST. Fagen Hansen scored a brace during the encounter. NUST suffered another defeat against current champions Windhoek Old Boys (WOBSC). The final score was 6-0 in favour of WOBSC. Dylan Finch scored a hat trick.

DTS also faced NUST and once again imposed another downfall on the latter. The students gave a good account of themselves but it was not good enough as they eventually went down to a 5-1 loss. Leanard Fick also scored a hat trick against NUST.

BDO Wanderers’ Bianca Muller and Michelle le Roux, each scored twice to register a 4-0 win against DTS. Saints Angels played NUST and showed why they are the current champions with a definitive 12-0 victory. Anya Robberts scored six times to put her name in the hat as top goal scorer of the season. Saints beat WOBSC 3-0 with Kaela Schimming scoring twice.

WOBSC got their season on the right track when they beat DTS in a closely contested match. The final score was 1-0. Captain Elzaan Erasmus scored the only goal in the game. BDO Wanderers played top class hockey and won 6-0 against NUST. Bianca Muller scored two goals during the fixture.

WOBSC played NUST and secured a 5-0 win. Saints took on BDO Wanderers and won the game 2-0. Azylee Phillander and Joanne van Rooyen scored for Saints. Saints Angels played WOBSC and had to show their resilience and character when they eventually got the goal that led to a 1- 0 victory.

The next round of fixtures will take place this coming weekend at the Wanderers and Windhoek High School hockey fields in Windhoek. For more information please contact Jacobus Coetzee at Cell: 081 860 8955 or send an email to jacobusctz@gmail.com.