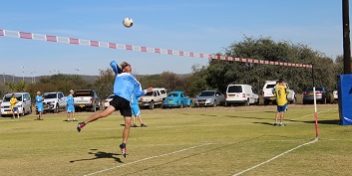 The Bank Windhoek Fistball League’s fourth round, will take place on Saturday, 11 August 2018 at the Swakopmund Fussball Club (SFC) in Swakopmund. Scheduled to kick-off at 08h30, this will be the last encounters before the League prepares for the play-offs in September.

Participating clubs will battle it out in two Groups: A and B. Cohen Fistball Club (CFC), who defended the Cohen Tournament last month, will face Sport Klub Windhoek (SKW), SFC and Deutscher Turn und Sportverein (DTS) in Group A. CFC 1 and SKW 2 have been earmarked as favourites to advance to the semi-finals. However, SKW 2 have problems this time around; the club will not have its regular starting five on the weekend. As a result, teams such as SFC, may have a genuine chance of booking a semi-final ticket come match day – due to home turf advantage.

SKW 1, who are currently sitting four points clear at the top of the log, will fight for top honours in Group B. They will have to overcome the determined CFC teams: 1, 2 and 3. The leading record champion, SKW 1, is only expected to encounter tough competition from CFC 2 for the semi-final spots. Nevertheless, a surprise can be expected as Cohen teams always fight until the last minute of every match.

It will be an exciting fight for the overall fourth place on the final table as this position guarantees the last available place in the play-offs semi-finals of the A – League. As it stands, SFC and CFC 2 share the fourth spot with 16 points each. Top of the log is SKW 1 (34), followed by CFC 1 (30), and SKW 2 (24).

Teams placed fifth through to eighth spot after the fourth round, will have an opportunity to compete for the B-League title during the play-offs. The Bank Windhoek Fistball Championship play-offs are scheduled to take place on Saturday, 29 September 2018 at SKW in Windhoek.