Creating a virtuous cycle of growth with The Social

“For the love of food and great ambience…”
That is Saima Herman’s (33) assured response when asked why she opened Windhoek’s hottest eateries. Owner of The Social, Herman, originally from Ongwediva but grew up in Windhoek, is quick to correct Windhoekers’ misperception that her restaurant is a fancy and expensive place. “We actually charge market-related prices with wonderful dishes that cater to all, whether you are vegetarian or a meat eater,” she says.

The Social, which opened in 2015, is situated on the corner of Robert Mugabe and Liliencron Streets in Eros and is open from 11h00 daily but is closed on Sundays. Herman, a Namibia University of Science and Technology (NUST) accounting graduate, says her partner, Joaquim Miguel, introduced her to the business. He has been in the industry for over 20 years building restaurants like O’Portuga, Paguel and Argentina Grill. “He has been a great mentor,” she says. She credits Miguel for most of her success and hails him for maintaining high standards for the restaurant. She is grateful for his continued mentorship and engagement not only with her but with the staff members also.

“Our seafood dishes are really popular and get sold out quickly but our Rack of Lamb is by far the best. For drinks, the trend now is gin and The Social Restaurant serves the best gin in town, hands down,” she boasts. Herman believes no business is an island and she has had valuable advice from people who are in the restaurant business as well as from friends and family.

“We used our own money with assistance from Nedbank. “Nelson Simasiku understands small business’ needs at every stage,” she says, describing her experience with the bank as joyful. Simasiku, the head of SME Business at Nedbank Namibia advises, “It’s important to have a practical vision for the future and there are various banking solutions for your current position.” He continues that Nedbank offers practical mentorship, small business seminars, short-term insurance and financial planning in their quest to assist SMEs to grow faster and more effectively. Building a relationship with your banker from an early stage and aligning yourself with partners that understand your business and can support your business’ growth is vital”.

“Creating jobs in Namibia is pivotal to me. If more jobs are created a virtuous cycle of growth and a stronger economy is also created. For us it’s not merely creating jobs but ensuring that we pass on skills to the next person so that they will be able to help themselves,” says a beaming Herman.Her objective with her business is perfectly in synch with that of the country. In Namibia, 13 tourists equal one job. Therefore, the country’s objective is to increase tourism arrivals to generate more employment for Namibians. The Social employs 30 people.

According to the National Sustainable Tourism Growth and Investment Promotion Strategy 2016 to 2026, one of the major weakness to Namibia’s overall competitiveness as a tourism destination is a lack of tailor-made courses or qualifications that suit the industry needs. Namibia’s goal is to transform into the most competitive tourism destination in Africa.The National Human Resources Plan 2010 to 2025 (NHRP) 8 specifically targets sectors with high potential for employment growth such as tourism, livestock farming, fishing, manufacturing and mining.

Tourism is the third largest contributor to the country’s Gross Domestic Product (GDP); it generates a significant amount of jobs and is a valuable foreign exchange earner for the economy. According to Herman, growing the hospitality industry in Namibia requires patience and love. “To run a restaurant is no easy task,” says Herman, who is pursuing a Master’s Degree in Business Administration from the University of Stellenbosch Business School. “My goal is always to improve myself, whether personally or professionally,” she says.

Asked about the story behind the name she says it was actually founded by her previous partner’s son. “We wanted a place where people can have a great time, with a great ambience, which we thought was lacking in Namibia at the time. We all thought the name is fitting and it speaks to what we want to achieve – a social place where people met and socialise,” she says.

Herman, who has worked for almost 10 years in the banking industry, lists finding the right staff, who understand their vision and are disciplined, as one of their biggest challenges. “A restaurant demands energy, attention to detail and a strong sense of hospitality from its employees as well as the owner. “It’s very difficult. Any business comes with the challenges of rental and managing people. But we have to pull through and make it work,” she says.

She says people mistakenly believe that owning your own business brings freedom and a lot of time. But maintains this is far from reality as business owners work long hours and manage many issues great and small. The Social has taken social media by storm and the owner says because they are a newly established business they needed to establish a following to eventually get feet through the door – social media provide those relatively inexpensive platforms.

Herman advises young business people to take risks, have a vision and work hard.
“There are no shortcuts to victory without the sweat,” she says. 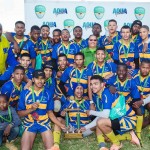 FNB Namibia has a long and proud history of supporting the development of many sport codes in Namibia. “Our relationship with the codes we sponsor […]

The first female country manager of IBM in Africa, Angela Kyerematen-Jimoh is set to be awarded the prestigious Corporate Personality of the Year award at […]

Be on the lookout for cybercrime scams

It is often said that if something seems too good to be true, it is. This sentiment is most applicable in the world of cybercrime, […]