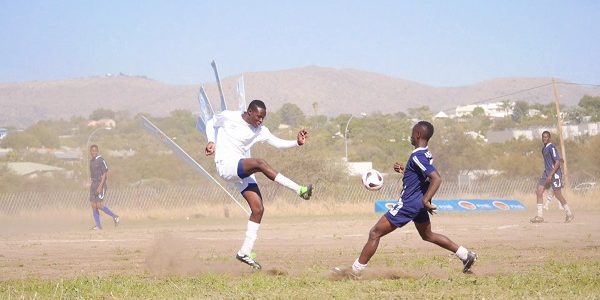 On 31 May 2018 Concordia College won their first FNB Classic Clashes soccer match convincingly against Rocky Crest at the Concordia College soccer field in Windhoek. Hange Mbaunguraije was the star player of Concordia, having scored the first goal. He was also crowned FNB Man of the Match. The second goal for Concordia was scored by Tjongarero Tjazupo. Fans of Concordia supported their team loudly and were rewarded with a win of 2:0 by the school team.

After the match coach Kaulinge Joseph of Concordia said: “We have been playing Rocky for almost three years and thus know their game plan. Our plan was to attack the midfielders and when we attack, we made sure the defenders made a lot of mistakes and we capitalised on that.
It was an exciting match and I would like to tell Rocky Crest that they should keep doing it. Keep it up, it’s an interesting event and I believe that it keeps a lot of kids off the street.”

Man of the match Hange Mbaunguraije added: “My team played very well and I believe it was a fair game. To Rocky Crest: Just try harder next time. Thank you to FNB Namibia and Aquasplash for helping us showcase our talent, keep on doing it every year.”

Over the weekend more FNB Classic Clashes matches took place at the coast and Kolen Foundation beat their old rivals West Side High with 4:1, while Coastal High were beaten at home with 3:4 on penalties against Swakopmund Secondary School. Team captain of Kolen Foundation, Alberto Katiti commented: “I think we were determined and ambitious, we managed to out-muscle the other team. It was a fair game. I would like to say thank you to FNB and AquaSplash for sponsoring us and we look forward to more exciting events.”