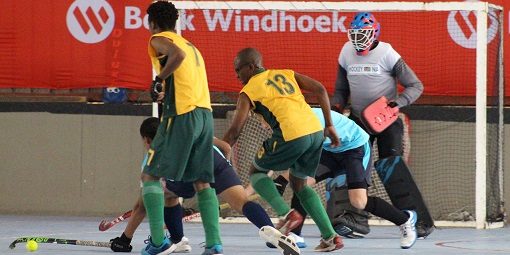 The Bank Windhoek National Indoor Hockey League entered its ninth round over the weekend in Windhoek.
At this round’s conclusion, Windhoek Old Boys’ (WOBSC) Mad Maroons are nine points clear at the top of the Men’s Premier League. Only three points separate Saints in second place and University of Namibia (UNAM) who occupy the third spot after having played three more games than their male counterparts.
In the Women’s Premier League, Saints moved ahead of UNAM on goal difference to the top of the log.
With only two weeks left until the league ends, defending champions WOBSC Mad Maroons look set to retain the title while things still remain undecided in the Women’s Premier League.

Bank Windhoek Men’s Premier League
On Saturday morning BDO Wanderers faced WOBSC Burgundy Bullets whom they defeated 5-1. Jan Izak de Villiers was in top form and scored twice for BDO Wanderers.
Later, WOBSC Burgundy Bullets suffered another defeat at the hands of Saints 1 who beat them 10-1. Cody van der Merwe was unstoppable and scored a hat trick during the match.
A tough contest between UNAM and Saints 2 followed. It was a relentless tussle for control of the game, but the students eventually won the match 3-2.

Deutscher Turn und Sportverein (DTS) and BDO Wanderers played to a 1-all draw. DTS was tipped to win this match but BDO Wanderers came prepared and decided not to give any open play chances to their opponents. William de Arth scored for DTS while Owen Hatten netted for BDO Wanderers.
Saints 2 defeated WOBSC Burgundy Bullets 3-0 on Sunday morning to make it the Bullet’s third defeat of the weekend.
WOBSC Mad Maroons took on a resolute BDO Wanderers. As expected, the champions dominated with a final score of 4-2. Siyabonga Martins scored a hat trick for Mad Maroons.
UNAM and DTS wrapped up the Sunday fixture in a tightly contested battle. The two teams gave each other a tough time during the match. But UNAM lost concentration towards the end of the match as DTS narrowly won the game with a 2-1 score.
Bank Windhoek Women’s Premier League
Matches in this league kicked off with a fixture between DTS and BDO Wanderers on Saturday morning. Zani van Lill scored twice for DTS who won the encounter 2-0.

UNAM took on Angels in a game that could have seen the students run away with the league. But Angels stood firm and held UNAM to a 1-all stalemate. Rachel Finch scored for Angels while Ina Luis netted for UNAM.
In other results
UNAM beat WOBSC in the Men’s First League on Friday evening. The students were too strong on the night as they won 5-1. Gurus defeated Saints 4-2 and Saints went on and drew 2-all against WOBSC.
Two games were played in the Women’s First league. The first game saw UNAM take on BDO Wanderers whom they defeated 4-1. Angels hammered DTS 7-3 in the second match.