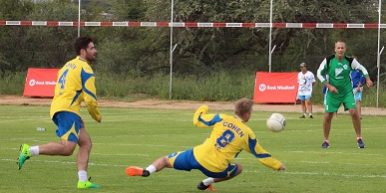 The second round of the Bank Windhoek Fistball League took place over the weekend at Cohen Fistball Club (CFC) in Windhoek.
Current champions Sport Klub Windhoek (SKW) increased their lead with six points at the top of the table. CFC and SKW 2, share second place with 18 points each.
SKW 1 cruised through Group A and made it to the semi-finals with ease. Swakopmund Fistball Club (SFC) finished second after they defeated hosts CFC 2 and 3, leaving them in third and fourth place respectively.
Group B was also dominated by the champion’s counterparts, SKW 2. They defeated CFC 1, CFC 4 and Deutscher Turn und Sportverein (DTS) to move into the semi-finals. CFC 1 later upped their game and beat DTS and club mates CFC 4. The win moved them into second place in the group.

After the group stages, the action moved to the semi-finals. The first match saw SKW 1 take on CFC 1. The first set went to SKW 1 who played with confidence. CFC 1 improved their overall play in the second set but lost towards the end. The game finished 2-0 in favour of SWK 1 who advanced to the final.

The second semi-final was between SKW 2 and SFC. SKW 2 started off strong and won the first set. After a constructive team talk, SFC improved their play and won the second set to level the match. However, the tables turned in the third set which saw SKW 2 proceed to the final. In the final, SKW 1 beat their club mates SKW 2 with a final score of 3-1.
In other results, CFC 2 beat DTS in the second round playoff while CFC 4 won against their club mates CFC 3. DTS retained the upper hand against CFC 3 after they competed for the seventh and eighth spots. CFC 1 won against their club mates in the fifth and sixth spot match. Thereafter, CFC 1 also defeated SFC in the match for third place.

Thirteen-year-old André Utz from CFC 2 was awarded the Player of the Day trophy for his exceptional play.

Next on the fistball calendar is the Coastal Indoor Classic tournament scheduled to take place on Saturday, 12 May 2018 at SFC in Swakopmund.