What such a list will reveal is that only those who are politically connected have benefited from this scheme in the same manner that the fishing rights concessions have recently revealed. This SWAPO Government ha decided to take our patience as a licence to rob our people blind. The time of reckoning, however, may soon be here for this government and those who feeds on its corruption and ‘don’t care’ attidude.

Our people will not forever sit back and wait docilely why the politically connected dole out the wealth of the country while the poor must queque up for scraps at the Harambee food bank.

Our people need a government NOW which looks after their needs and not one which administers the multiple privileges of the elite. 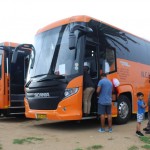 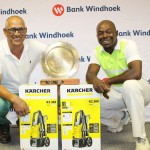 Representatives from religion, law, and education in Myanmar gathered together with an international NGO to seek peaceful development and promote awareness of and cooperation in […]

Trio of fun for hope

Celebrating 50 golden years of fighting cancer in Namibia, the Cancer Association of Namibia is proud to announce that internationally acclaimed comedian, Barry Hilton, will […]

FNB Namibia has refurbished John Meinert branch, which is now open to the public. The newly renovated branch opened its doors on 12 December 2017, […]