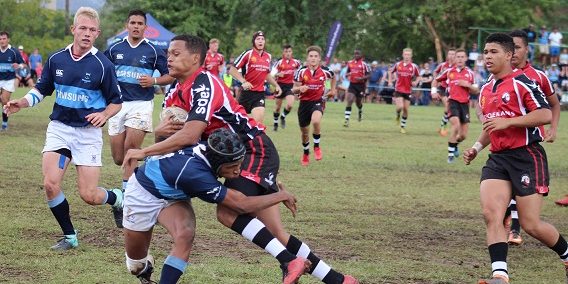 The HTS Hennie de Waal Sports Festival, sponsored by Bank Windhoek concluded over the weekend and saw under 15 and 19 teams from 18 schools in Namibia and one from Zimbabwe compete in netball, soccer and rugby.

The annual festival now in its 22nd year, named after a former teacher, is aimed at celebrating Namibia’s Independence and is also a platform to develop learners’ skills in netball, rugby and soccer.

Windhoek Gymnasium won both the under 15 and 19 rugby trophies while Rocky Crest High School took the under 19 soccer trophy.  Jan Möhr Secondary School walked away as the under 15 soccer champions.

Due to heavy rains on Saturday, the netball finals could not take place and will only be played after the mid-term break. In the U19 division the final will be played between WHS 1 and WHS 2 and the U15 teams from Jan Möhr and Windhoek Gymnasium will compete in the final.

“The event was a huge success as we witnessed 18 teams compete for top honours. Despite the rain, other sport codes besides netball, continued,” said the event organiser Claus Schmidt.

“The staff of HTS and its management, would like to congratulate the participating teams for putting up notable performances. A special word of thanks goes out to Bank Windhoek.  As the main sponsor, you have made this event possible and it is highly appreciated,” Schmidt concluded.