The UPM appreciate the action taken by the Minister of Urban and Regional Development, to suspend the Rehoboth Town Council, as the Party has over the past years tried to get Government to intervene.  The intervention came after the issue was first raised in Parliament by UPM Member of Parliament, Jan van Wyk, on 09 April 2015. It has taken time, but finally something has happened and the SWAPO led Council has been called to order.

The UPM wants to inform its members and supporters that its Councillors has nothing to fear, as they were not involve in the illegal transactions at the RTC. The UPM also welcomes the re-instatement of the CEO and trusted that things would change in the town.

The UPM will keep its members and supporters informed. 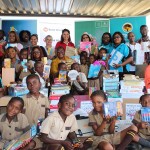 Harare, February 27, 2018 (New Ziana) – The United Nations system in  Zimbabwe is geared to support the new administration and is exploring  ways to […]