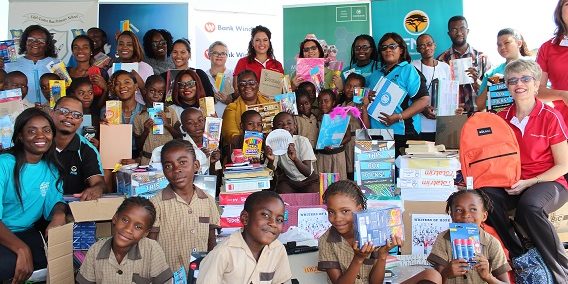 This year BAN, with the assistance of “Writers of Hope”, combined forces to collect stationery and school gear from staff and their customers in an effort to support under-privileged schools around the country “Education has been highlighted as one of the most important investments we can make in nation building,” said BAN’s Public Relations sub-committee chairperson, Jacquiline Pack.

“BAN is proud to be able to step up and support selected schools with much needed donations,” she added.

“I would like to thank those who have given so generously for this cause. Without your involvement and support, this project would not have made this impact for our children,” Pack concluded.

The national project commenced on 24 January 2018 and culminated in a street collection at various intersections during morning traffic in Windhoek on 22 February 2018. Additional stationery items were purchased with the money collected. Collectively, BAN members collected N$36 000 and three thousand kilograms of stationery items. Each member bank chose schools countrywide to donate the stationery to.

Fidel Castro Ruz Primary School in Babylon informal settlement in Windhoek is just one of 39 schools countrywide that was identified as a recipient for the donations. The school principal, Ms Ndapandula Shilyomunhu said at the handover on Thursday, “Being situated in an informal settlement and receiving such a generous donation came as a surprise. It is beyond what I have dreamt of for this ‘school of progress’. You have made a mark in our children’s lives and there is indeed hope for a brighter tomorrow. Our heartfelt gratitude goes out to all BAN’s members. Thank you very much.”

Established in 1997, the Bankers Association of Namibia, commonly known as BAN, is dedicated to making a difference on issues of common interest and relevant to the banking and social sector, such as supporting worthy and socially uplifting causes in a non-competitive environment where small, collective contributions have the potential to make a huge impact.