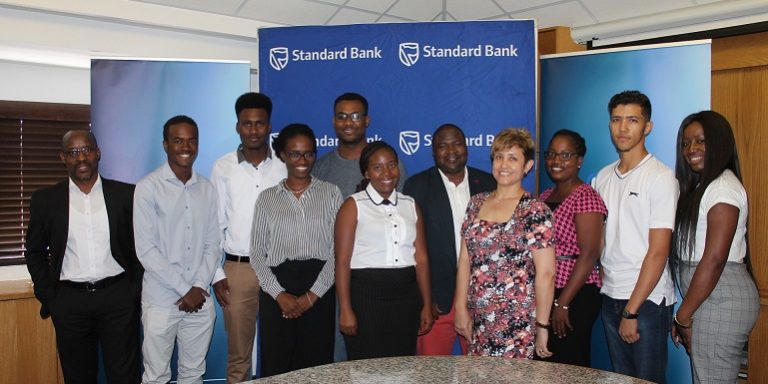 Receiving  quality education and being afforded the opportunity to pursue ones dreams is the right of every child.

Cognisant if this fact, Standard Bank has always committed a large portion of its Corporate Social Initiative (CSI) budget towards aiding learners who have excelled academically to achieve their dreams through their bursary scheme.

This week the Bank once again awarded bursaries to some of the best performing students to cover their financial costs for their study periods at tertiary institutions. The Bank has invested N$1.1 million in the bursary scheme this year alone.

“Tertiary education should not just be a privilege afforded to those who can afford, but also with disadvantaged backgrounds with potential to excel academically. As such I am proud to announce that this year we have awarded four deserving students with bursaries that will cater for their tuition fees, study materials, accommodation and even pocket money,” the Bank’s Head of Learning and Development, Johanna Nghililewanga, said this week.

Standard Bank’s bursary scheme targets matriculants who have obtained excellent or high academic achievements and who are in need of financial assistance to pursue their studies and realize their dreams. Their preferred fields of study should be in Commerce, Science, Finance, Engineering, Technology and Property studies.

Nghililewanga stressed that the bursary was more than a sponsorship but the beginning of a long lasting relationship as the students are now part of the Standard Bank family. She also added that the bank would keep tabs on them and give them whatever support they require while they are studying.

Once they graduate from their respective tertiary institutions and they perform exceptionally well, the students will then be able to join the Bank’s Graduate Development Programme. The Graduate Development Programme is a vital component of the Bank’s talent management process as it aids in developing the next generation of Blue bankers to join in the ranks of the innovative Bank, as well as give them a solid foundation and understanding of the functions within the Bank.

The Bank’s Head of Human Capital, Isdor Angula, also said he was happy to formally welcome the students to the Standard Bank family, adding that the Bank would serve as foster parents for them for the next few years and ensure their success.

“These (four) students were selected from 400 candidates who were equally exceptional in their academic performances, however they stood out for us. Once they graduate they will have the opportunity to start their careers with Standard Bank, and that is not only limited to Namibia, but also the rest of Africa where we have our footprint,” he explained.

He reiterated that the Bank’s expectation was that they achieve academic excellence and that this is an opportunity they should grab with both hands.

The four graduates, namely Tia Kaumunika, Justin Eiman, Eunice Fefa and Mac Nyambe, expressed their gratitude towards the Bank for acknowledging and rewarding them for their hard work.

“My aspirations are to study to become a Chartered Accountant and eventually become a Forensic Accountant someday. I believe that Vision 2030 is in our hands as the youth, we have to work hard to ensure that our country develops and that we have a sustainable economy,” Fefa said.

The 18 year-old who is has been enrolled at the University of Namibia said she was ecstatic that the Bank believed in her and she would do her best to maintain her academic excellence.

Kaumunika also expressed his gratitude towards the Bank and stressed that he was privileged to be afforded to pursue his dreams of acquiring a degree as a Civil Engineer in Germany.

“I look forward to working with and in the bank for the next few years as it is an interesting opportunity that I wasn’t sure would be possible. I am truly honoured and grateful for this opportunity and I hope I can prove my worth,” he concluded.