The Etosha Fishing Corporation has won four of the five large enterprise categories at the 5th Annual National Awards hosted by the Namibia Standards Institution (NSI) in November this year.

The NSI quality awards programme was introduced in 2012 with the aim of honouring Namibian companies in all sectors who contribute to quality advancement in support of national economic growth and development.

In a press release issued on Thursday, Etosha Fishing’s Managing Director, Pieter Greef said the company is delighted to once again receive the recognition.

According to Greef, the company has shown consistency in the quality awards since 2013 when it scooped several of the awards, while in 2015 the company also managed to win the same categories it scooped this year, going on to win Company of the Year and Exporter of the Year at the Southern African Development Countries (SADC) Quality Awards.

He maintained that the company is an unrivalled player in the Namibian fishing industry and its customers are the market leaders in canned pilchard brands which include Lucky Star and Glenryck brands.

He also added that the company has reached great ground breaking strides with the introduction of its own EFUTA Maasbanker brand which was the first Namibian canned product to receive an NSI product endorsement.

“The EFUTA Maasbanker is Halaal certified, this means that our product can be consumed by people of any culture and religion, Greef said.
Greef also announced that the company once again plans to enter for the next SADC Quality Awards. 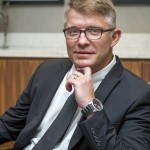 American Economic Development consultant and entrepreneur Jill Bishop together with 20 of her business friends met with President Hage Geingob at State House on Thursday. […]

Windhoek Draught, a beer brand brewed and bottled by Namibia Breweries Limited, a subsidiary of the Ohlthaver and List Group of Companies, in May 2021 […]

The Brave Warriors arrived to a heroes’ welcome at the Hosea Kutako International Airport on Monday, following their participation at the 2018 African Nations Championship […]

Bank Windhoek is proud to present ‘The Zoo Story’, a LAB Theatre production brought to you by Aldo Behrens, David Ndjavera and Keamogetsi Joseph Molapong. […]