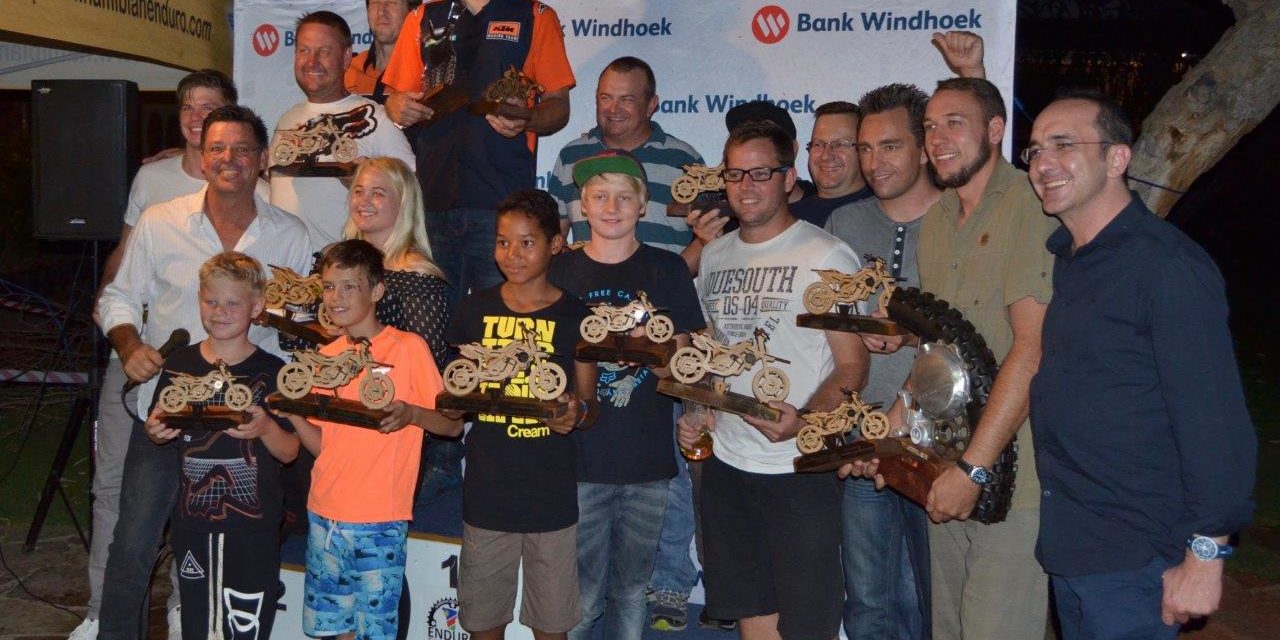 On Saturday, 4 November, the winners were officially announced by the Namibian Enduro Club at a function on Farm Elisenheim. Bank Windhoek donated N$20 000 prize money for the winners.

The Namibian Enduro Championship 2017 accommodated both female and male riders in seven classes, from the National Classes for professionals, up to the Development Class for young beginners, and thus enabling all Enduro enthusiasts to join the action. The series events took place in Omakwara, Lichtenstein, Otjihase, Abbabis, Uis and Elisenheim. A total of 113 motorbike and quad riders took part in the events, from 9 to 55 years of age. On average, 59 riders entered per event.

The National Motorbike Champion 2017 in the Open Motorbikes Class, Henner Rusch received the first place trophy, sponsored by CBT Racing. Rusch secured his fifth consecutive championship title, ahead of Marcel Henle (KTM) and Corne Visser (Sherco) in third. Henle and Rusch had very close battles throughout the year and Henle will be eyeing the 2018Championship. Visser who finished fourth in 2016, stepped up in 2017 and will be chasing the other two contenders.

The senior national motorbike championship trophy sponsored by Leath went to Jörn Greiter (KTM), followed by Werner Wiese (KTM) and Dave Brown ((KTM). The “Best Motorbike Rider” title award deservedly went to Greiter, who had an exceptional season, managing to win six of seven events and therefore scoring the most championship points in the national championships.

The Namibian Quad Championship consists of two classes, i.e. the open quads and the ladies quads. The ladies class championship title and trophy, sponsored by Steel Force, went to Shannon Rowland (Honda) who won three of seven events, and defended her 2016 title. The quads Open Class Championship trophy sponsored by Victoria Pharmacy went to JL Oppermann (Honda) who dominated the season. His hottest contender, Gary Rowland (Honda) – winner at Uis – finished second ahead of Abner Abner who remarkably finished third in his first season. The best quad rider of the year title went to JL Oppermann too.

The off-road bikes class was very popular in 2017, with 35 entries, and another youngster, 12 year old talent Keanu Weber-Trianus riding a KTM SX 85, deservedly took the championship title and trophy sponsored by Kaleidoscope Marketing. He was also awarded the “Most improved rider of the year award” for his development. Teddy Kausch (KTM) impressed with three victories during the season and finished second overall. Jaco Husselmann (Sherco) finished third and received the “Motorbike Rookie of the Year” award for his performance this season.

The Namibian Enduro Club extended best wishes to Marcel Henle, who will participate and represent the Club and Namibia Internationally at the prestigious Roof of Africa Event in Lesotho end of November. Henle will be competing against the best riders in the world in the Gold Class. The Enduro Sport has become highly competitive over the last few years in Namibia, also due to the excellent support provided by Bank Windhoek since 2011.