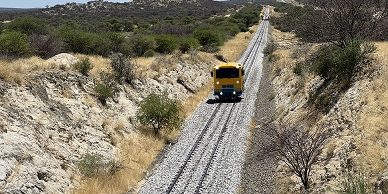 TransNamib Chief Executive Officer (CEO), Johny Smith, has said to have increased rail capacity service between Kranzberg and Tsumeb railway route, a total of N.dollars 15 billion is needed for the full upgrading of the route.
Smith said during a field trip witnessing at the Omaruru railway station on Friday, adding that 88 per cent of the upgrade and rehabilitation of the 440 kilometres railway line between Kranzberg and Tsumeb would be at a cost of N.dollars one billion.
Smith said the rehabilitation, which was done in phases by the contractor, D&M rail, aims to increase the critical railway link which forms part of the corridor between Walvis Bay and Northern Namibia, linking the country with Angola, Democratic Republic of Congo (DRC) and Zambia.
Smith said the upgrading includes 60 kilometers, which was rehabilitated fully, 360 kilometres upgraded partially, while the partial upgrading of a further 20 kilometers will be completed in January 2023.
He stressed that most of the railway infrastructure in the country was built in 1960 noting and upgrading the rail is crucial as rail rail transportation remains an important element within the logistics sector as well as a critical enabler for Namibia’s economy.
“Due to the line not fully being upgraded, about 1 012 broken rails have been recorded over the entire railway section between Kranzberg and Tsumeb, causing further limitation of speed and freight volume restrictions,” he said.
Smith noted that currently there are 100 heavy trucks moving on the route per day, utilising the Walvis Bay Corridor Lubumabashi Corridor between the Port of Walvis Bay, Northern Namibia, Zambia and DRC that should be on rail.
He further indicated that railway infrastructure in the country is about 2 687 kilometres, currently TransNamib is running about seven to 10 loads per day, however the desired capacity is to maximise it by 20 loads per day.
At the same event, Minister of Works and Transport, John Mutorwa said the government was a little bit slow in the upgrading rail, given that it was built 63 years ago, hence the government saw it highly prudent to invest in the continuous rehabilitation of the railway.
“Development cannot take place without transport infrastructure. This infrastructure is expensive, however, it is a good investment for the future and I can confirm that the contractor has done its job,” he noted.