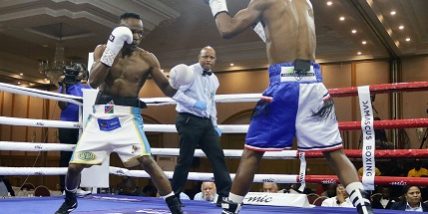 Namibian flyweight boxers, Immanuel ‘Imms’ Josef and Fillemon Nghutenanye, successfully defended their titles on Sunday morning at the Safari Court Hotel in the capital, as part of the MTC Salute Boxing Academy’s ‘building champions’ boxing bonanza.
Josef stepped into the ring to defend his World Boxing Organisation (WBO) Africa title, while Nghutenanye defended his World Boxing Association (WBA) Pan-African title for the first time.
In the main support bout of the night, Josef fought against South Africa’s Tisetso Modisadife and the Namibian boxer meant business from the first round as he landed punches when needed to throughout the opening six rounds of the fight, despite his opponents being a tough cookie to crack.
Round five of the fight saw the two boxers accidentally clashing heads, resulting in a cut on Josef’s forehead that required a doctor to access the boxer’s condition.
The fight was then allowed to continue to round six but the blood flow became too much and the doctor stopped the fight at the end of that round.
With six rounds completed out of the scheduled 12, the rule book called it a technical stoppage and they went to the judges’ scores to determine the winner.
At the time of the stoppage, Josef had won four rounds out of the six on the judge’s scorecards as all three judges scored the fight 58-56 in his favour.
Meanwhile, WBA Pan Africa flyweight champion, Nghutenanye, had to fight with an injured wrist from the first round to the sixth, where he floored his Tanzania opponent, Ally Ngwando, to also retain his title at his first defence.
In the only fight that saw a vacant national title on the line, Abed Shikongo defeated Simon Shafodino on points after 10 rounds of boxing to become the new Superweight National Champion. Shafodino survived an early knockdown from Shikongo in the first 40 seconds of the fight.
In another bout on the night, Harry Simon Jr added another win to his record when he knocked out Malawian boxer Limbani Chipaka in the second round of their sixth-round bout.
Lukas Ndafoluma also made his return to the ring after his defeat to Sergei Vorobev of Russia in September this year, redeeming himself with a knock-out of Mussah Mkwanda from Malawi in the fifth round of the scheduled six.